Lately, there have been plenty of affordable action camera models on the market. However, only a handful of those has video stabilization in 4K mode. In this review, I take a look at Eken V8s action camera.

Eken has been on the market for a while now. Their most popular model Eken H9 quickly became one of the best cheap action cameras, and took the market by storm. Besides the EIS in native 4K resolution, this sports camera has other interesting features such as dual screen and the remote control support.

In this article, I test the Eken V8s. I put the camera on performance, video, audio, image quality, usability, and reliability.

So let’s see how Eken V8s performs and did it pass my tests.

Discount: Use coupon 8F7ZHTUJ to save 8$ on Eken V8S on Amazon.

Take a look at product technical specs before I show you what’s inside that beautiful box. 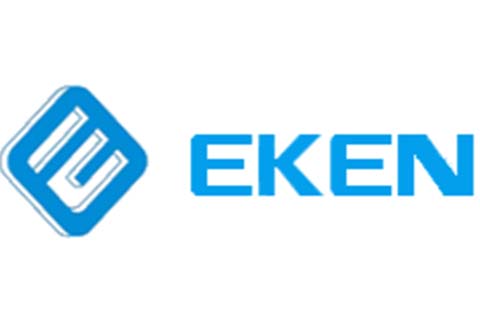 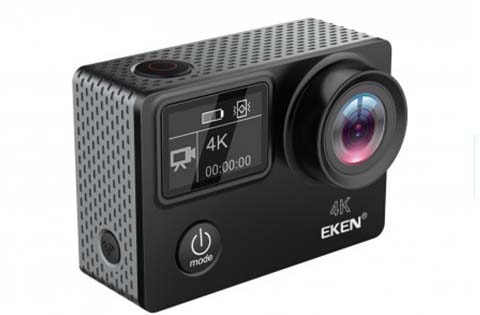 Take a look at my unboxing video to see what you get inside the Eken V8S box. 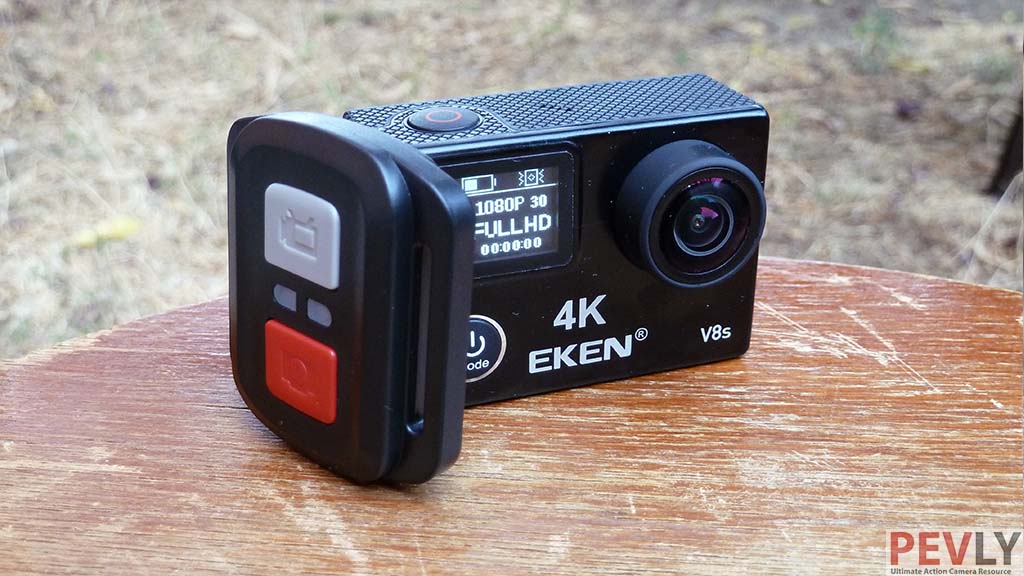 Just two words about these two accessories: The wall charger is a 1.5mAh and it works great, the tripod is 10cm high, very stable and light to carry. Good thinking, Eken!

Design of the Eken V8s is not much different than that of the most of action cameras we review here at Pevly. Standard rectangular shape. The front of the camera appears to be made out of the metal, but it’s not. The rest of the camera surface has anti-slide scrimshaw.

The camera itself is quite simple looking and has only 3 buttons: Power/Mode, Wifi, and Rec. While it looks simplistic, it can be quite a daunting experience to browse the menu, which I will show you in the menu overview paragraph.

The buttons are quite bulky which makes them easy to feel under your fingers, even with the gloves on.

One of the first things I noticed is that this camera has no LCD status indicators and I can’t really comprehend why. Simply said, without checking out one of the screens you do not know whether the camera is recording or not, and neither if it is charging.

Another thing is that Eken V8s does not have an incorporated 1/4″ screw mount. With that kind of bushing, the camera could be easily attached to a tripod or any sort of accessory. So what does that practically mean? Not having the 1/4″ bushing on the camera means you will always have to use a frame to mount your camera onto a tripod.

The camera interface came as a surprise. I mentioned above that with only 3 buttons you can just select (with “rec button”) and scroll ONLY down the list (with the “power” button). This is very slow and nerve-stretching. Luckily the user interface of the menu is very lean and simplistic, which somehow compensates for this two-button navigation.

The standard on-screen menu is composed of standard parts. The first part contains the quick modes, in the following order: 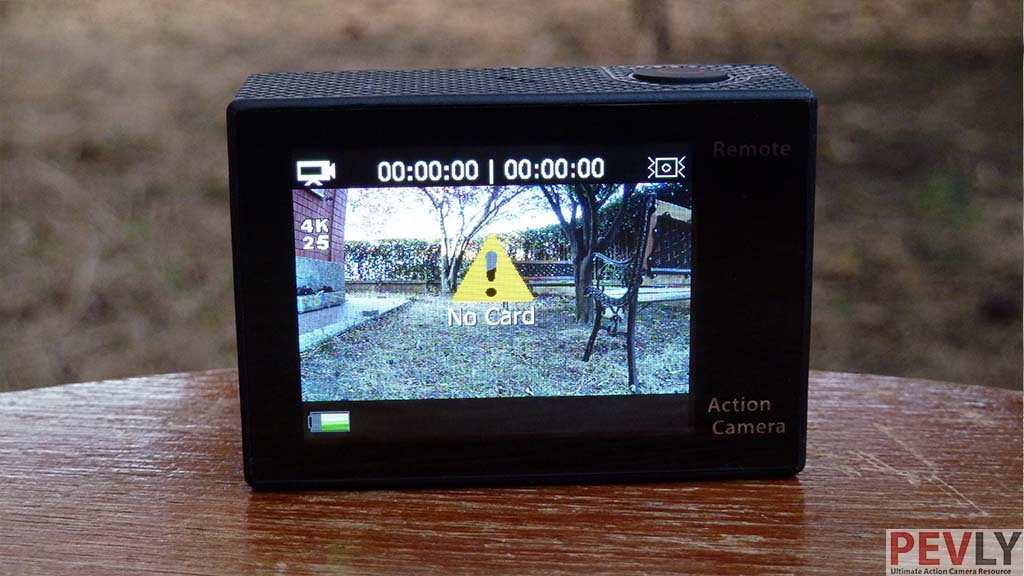 The second part has: 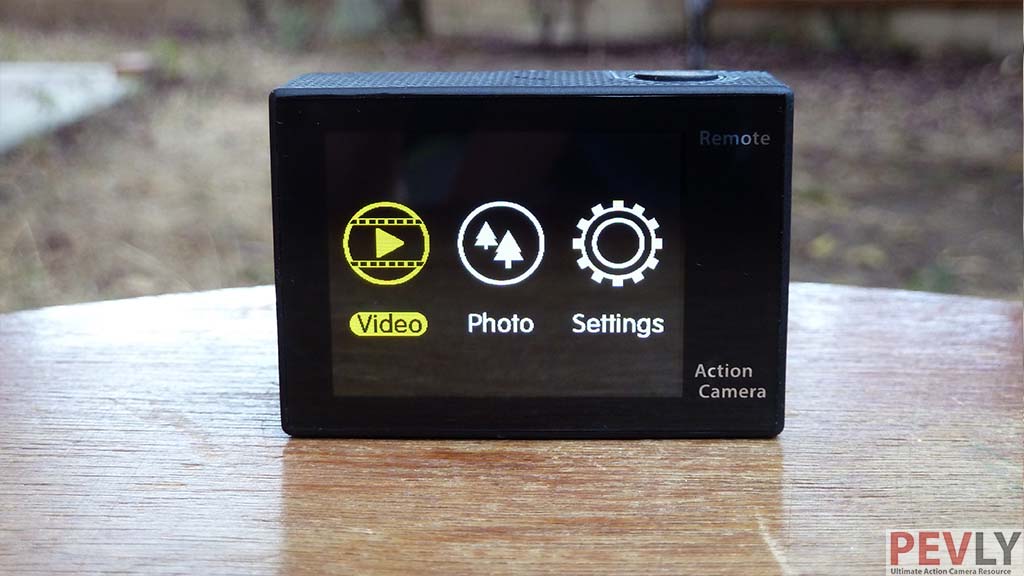 Well, in settings section we can find only:

Take a look the settings walkthrough in a gif animation below.

Obviously, the manufacturer will have to further optimize the menu since it has some quite confusing options. It is more than obvious that the menu is simple, but there are some things which were quite frustrating for me personally.

First of all, you are not able to turn off the Electronic Image Stabilization. Secondly, the camera has only 3 video resolutions with a maximum of 60 frames per second, which means that making serious slow motion videos with this camera won’t be possible.

Funny thing is that there is a photo resolution option inside the menu, but you can select only the default 14 megapixels. It ruins the user experience, unless the next firmware update adds some meaningful change.

Ok, this is embarrassing but I have to say it. When it comes to video quality. this camera is one of the weakest I ever tested. My previous Eken camera, the H8R, did not have the superb quality of the video but it was acceptable. Not so with this model.

Before talking about the video quality I want you to know that usually all the tests in my reviews are done in 1080p at 60fps because it is the most used resolution. With this camera, the 1080p resolution is really crappy! Forgive this term, but it simply fits!

In a 4K resolution the quality of the video is better, but in order to stay consistent with my testing methods, let’s see how the Eken V8s performs in 1080p.

The quality is very bad, and with the EIS on, the cam’s 170° field of view is narrowed down to ~100°. And as I said, there is no way to turn the stabilization off. At this point, I don’t know what to say, so I’ll let the videos talk.

This is the difference between 1080p and 4K videos:

Comparison between two frames from a 1080p and 4K videos:

The major problem in resolutions lower than 4K is the lack of details and sharpness. Additionally the exposure is not well adjusted. It is fairly hard to comprehend why the camera behaves inconsistently in different resolution. The quality of the 4K video is better compared to lower resolution outputs. Contrarily, the videos in time-lapse mode are quite good. Take a look at the sample below.

In the night this camera can capture a lot of light, and for this fact it is better than majority of other cameras in this price range – but the quality still remains rather poor.

As you have surely noticed, in these images there is a lot of wakes further reducing the quality.

The only thing that works well is the EIS because it is well-made. Even though the EIS works great in terms of video stabilization, sometimes it gets laggy.

WARNING – Don’t use this camera while it is recharging because it could melt down! Also, it reaches high temperature while recording; be careful.

In fact, I had to hit it with full power A/C airstream when I used it as a dashcam.

Quality of the photos is a little bit better than video, but with a 100% crop, you will find out that the photos appear like paintings with a very low amount of details. This usually hints at too much denoising, which probably originates from the algorithm counteracting the effects of hot sensor.

What I want to say is that the camera electronics is simply overburdened. The EIS in 4K probably puts too much “pressure” on the sensor and the processor, causing inferior video and photo quality. It probably also influences the excessive heating. But there could also be a swatch of different reasons.

The colors and saturation  are better in photos compared to videos, but with a little crop you will find out that the quality reminds one of painting. Imagine the image on a canvas. Once you look at it closer, you’ll see the artist’s strokes / artifacts. This is quite similar to the quality of the Eken V8s images, once slightly zoomed-in, there are weird artifacts there, and it just isn’t sharp enough. 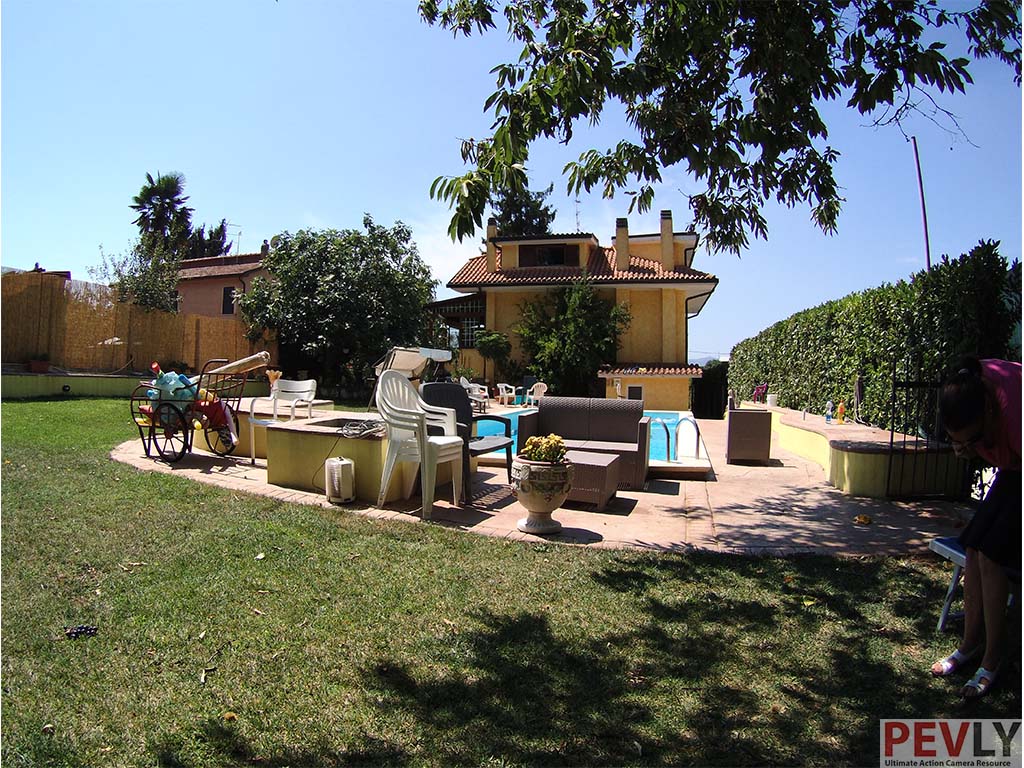 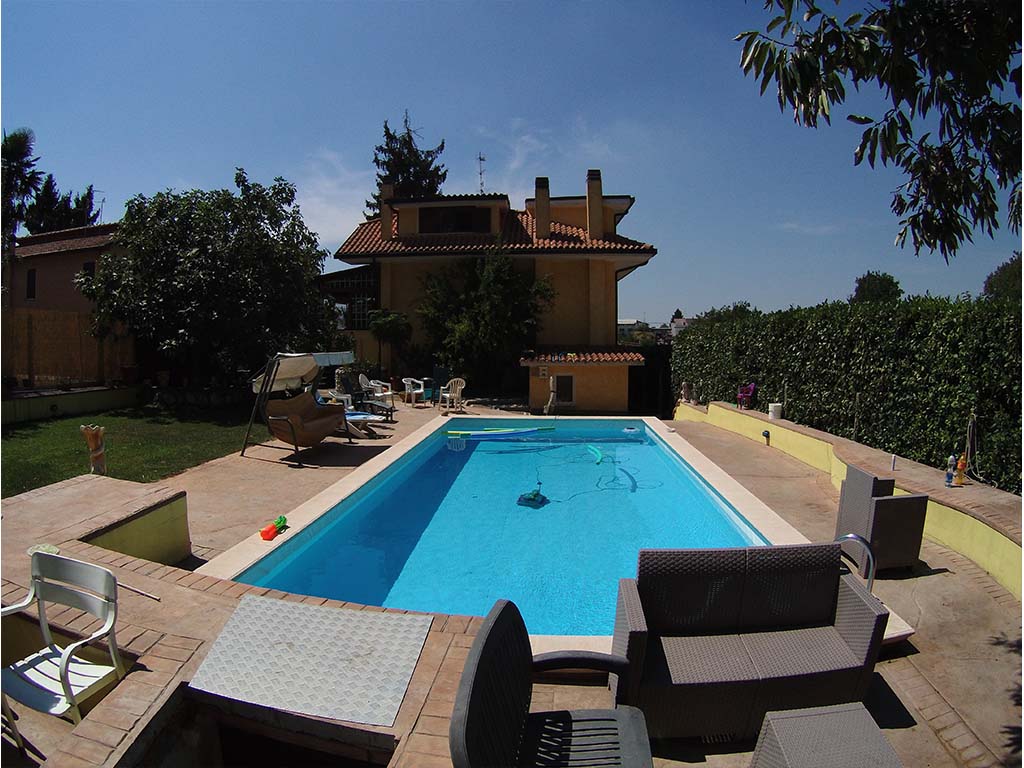 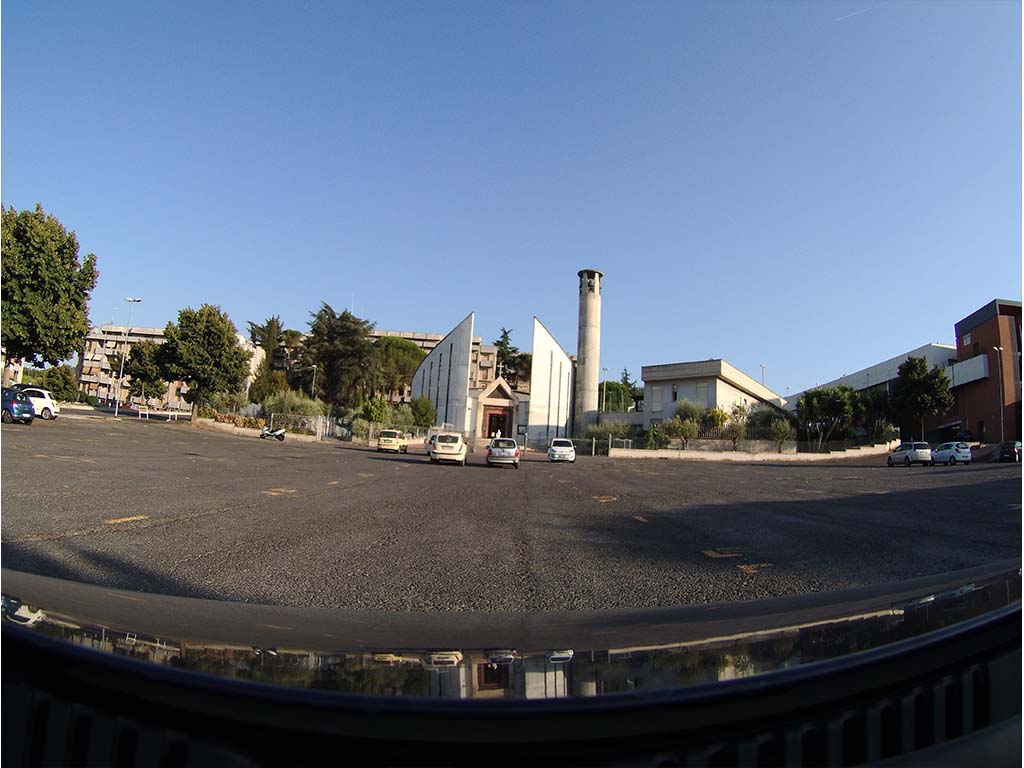 Oh yeah, the audio. I almost forgot about that because every time I needed to check some videos from this camera I removed my headphones – for hearing safety. Good luck, if you want to check the following two videos:

You don’t need me to understand that the audio is not good at all. Everything seems muffled, and with the high volume, especially in low frequencies, the distortion is incredibly strong. A normal speech can easily imitate sounds of someone gagged.

WiFi and the App

Eken V8s has a built in WiFi which means you can operate the camera remotely via your smarthpone. The app interface is very simple.

The connection and the app is made just of a Rec, Playback and Mode buttons. Nothing more. Oh yes, there is also the resolution setting, but most of the times it doesn’t work… The app is useful just to access the cam easier, but there’s nothing more to it. 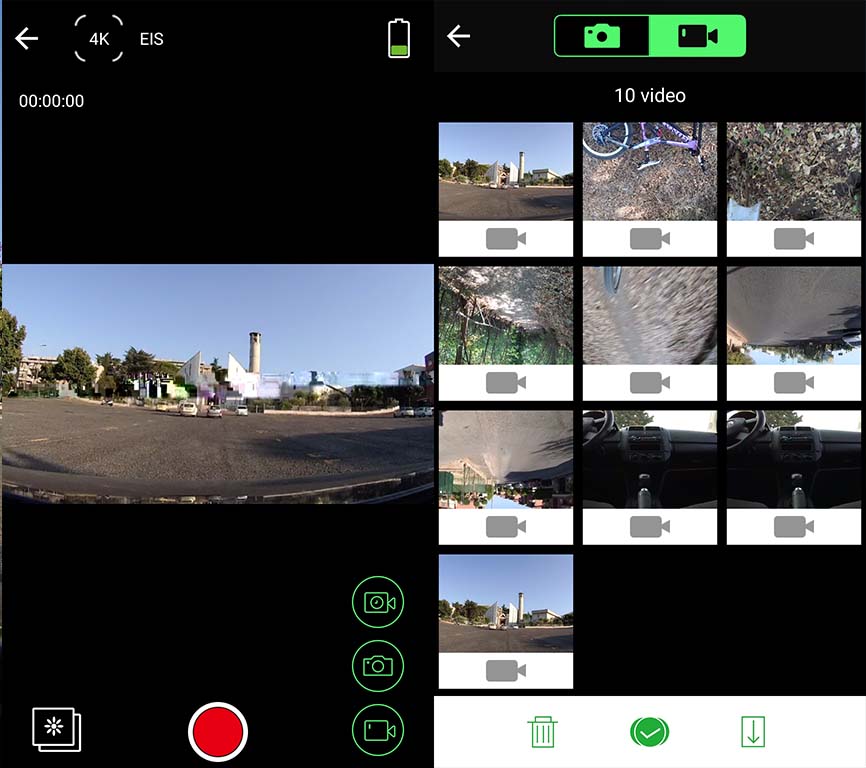 The remote control of this camera is one of a few things that actually works good. Its range is about 2-3 meters. The buttons respond perfectly to the click. It is also splashproof, which means it will be resistant to some occasional water drops, but you can’t dive with it.

These are the results of my battery tests:

It’s not easy to exactly measure how much time the camera takes to reach a full battery charge because there are no indicators, but I think it is about 3 and a half hours.

It is really hard to say what went wrong with the v8S. My personal belief is that Eken wanted to get too much from the hardware and that resulted in overload of the processor and the sensor, which in turn caused the overheating, reduced photo quality, etc.

Furthermore, I do not understand some of the decisions they made regarding the inability of turning EIS off, not having enough resolution and FPS choice. Even though camera supports WiFi and has a remote controller, the audio quality remains poor.

The design and build quality are quite decent, and 4K stabilization works well most of the times.

My personal conclusion is that for the retail price of the Eken v8S you should consider something else. Take a look at our list of best action cameras.

Having stabilized 4K is not something that many brands managed to do, excepting Sony and YI Technology. But those cameras cost three times the Eken v8S. Conclusion is that in order to have EIS correctly perform in 4K, a better hardware is required. Eken tried to create something cheaper and we give them credits for that, but the results were just not good enough in our opinion. This does not mean that their next model won’t do good. We are looking forward to see what’s next in store for Eken.

However, if you decide that the Eken v8S is something you’d like to buy, check out their official store on Amazon.

Discount: Use coupon 8F7ZHTUJ to save 8$ on Eken V8S on Amazon.

User Rating: Be the first one !