Ever since the SJCAM SJ8 release information got leaked to the public in August this summer, the community has been speculating on the camera specification, pricing and features quite a lot. A few days ago, we got some more inside information about the SJCAM SJ8.

First of all, like most of us speculated, SJ8 will be released as a series of cameras. Similar to their SJ6 series (which had S6 Legend and SJ6 Air), the latest series will include several models. For now, these SJ8 variations have been revealed :

While this article will be based on rumors and speculation, I am pretty sure that we are getting more and more accurate with our information and that soon we can expect SJCAM to reveal the final specification and products features.

Before we dive into the specification and reveal some quite exciting features, let’s quickly recap what SJCAM has been doing in 2017. The company has been expanding quite rapidly. Recently they acquired the sjcam.com domain over which there was quite a lot of controversy.

Even though I do not have an insider info on what was going on, I know that in 2014 sjcam domain was used by SJCAM distributor, who pretty much made their SJ4000 model a world-famous camera.

Somewhere in 2015 SJCAM wanted to establish themselves as a brand and began their own marketing efforts. They grew from being a factory to becoming an affordable action camera brand. They registered their own domain name under sjcamhd.com and opened their own store. Furthermore, they invested quite a lot into marketing.

These investments came at a cost. Some of their products were just not as good as their previous models. On Pevly, we covered nearly all of the SJCAM models ever made in past, and some of them were rated pretty poorly by our team. Their SJ7 series had some serious heating issues for instance. Lately, the situation has been improving. We were very satisfied with their SJ-Dash and the SJ6 Legend Air.

What is more, they have been expanding their offer of affordable video cameras. The Shenzhen based company got into body-worn cameras with their SJCAM A10 and into virtual reality devices with SJ360.

A few weeks ago, I began to notice that sjcamhd.com, which was an official company website, now redirects to sjcam.com. This can only mean that the distributor who owned the domain finally decided to sell it to the manufacturer. This is one more proof of how serious this Chinese company is about the expansion.

It is pretty obvious that with SJ8 models, the company wants to challenge some quite established mid-range action camera names in the industry like Yi Technology, Xiaomi and even the highest end ones like GoPro. When we first released the news on this series, I was personally expecting that there will be only one model called SJ8, however as I mentioned, the SJ8 is actually a product series consisting of SJ8 Air, SJ8 Plus, and SJ8 Pro.

We did our best here at Pevly to provide you with an early version of specs table so that you know what to expect from these cameras. Please understand that specs table is compiled and based on rumors and unofficial info. Even though I am pretty confident that it’s quite accurate personally, take it with a caution.

We will, of course, do our best to test these models out for you and verify the specs. Tables will be updated once more info is available to the general public. If you happen to have more additional information on the specs, please leave a comment below.

Powered by 1200 mah battery, NTK96658 processor, and a Panasonic MN34110PA, SJ8 Air model is the most basic one from the series. Its main selling point will probably be a lower price compared to the other two cameras.

It comes with some standard mid-range features like video stabilization, remote control compatibility, and external microphone support. Unlike the other two, this one does not have a front display, only an LCD 2.33″ retina, touch-screen at the back.

The only advantage of the SJ8 Air is 14-megapixel image resolution. The other two can capture still images at 12 megapixels. According to the information we have, the highest recording resolution which supports Gyro Stabilization will be 1080p/60 fps.

The SJ8 Plus version tries to get the best of both worlds. It’s in the middle when it comes to both price and performance. This model has a dual screen. Front LCD display is 0.96 inch, whereas the back is 2.33-inch touchscreen. It’s biggest selling point is that it can record in 4K at 30 frames per second.

It is possible that the gyro video stabilization will work in 4K @30fps. The SJ8 Plus is powered by a boosted Novatek NTK96683 chip and Sony Sony IMX117 image sensor. I was unable to find more information on NTK96683 chipset.

The most advanced of all, SJ8 Pro version is the only model from the series which can record in 4K at 60 frames per second. This camera arrives with a powerful Ambarella H2-2S85 chip and improved image sensor over the plus version – Sony IMX377. The Pro has all the features and compatibility of the two cheaper models but arrives with a voice control support. This is the first SJCAM camera which will implement such feature.

Even though there were rumors that SJ8 will support a GPS, according to the information we have now, this won’t happen. I was personally very excited about the GPS. 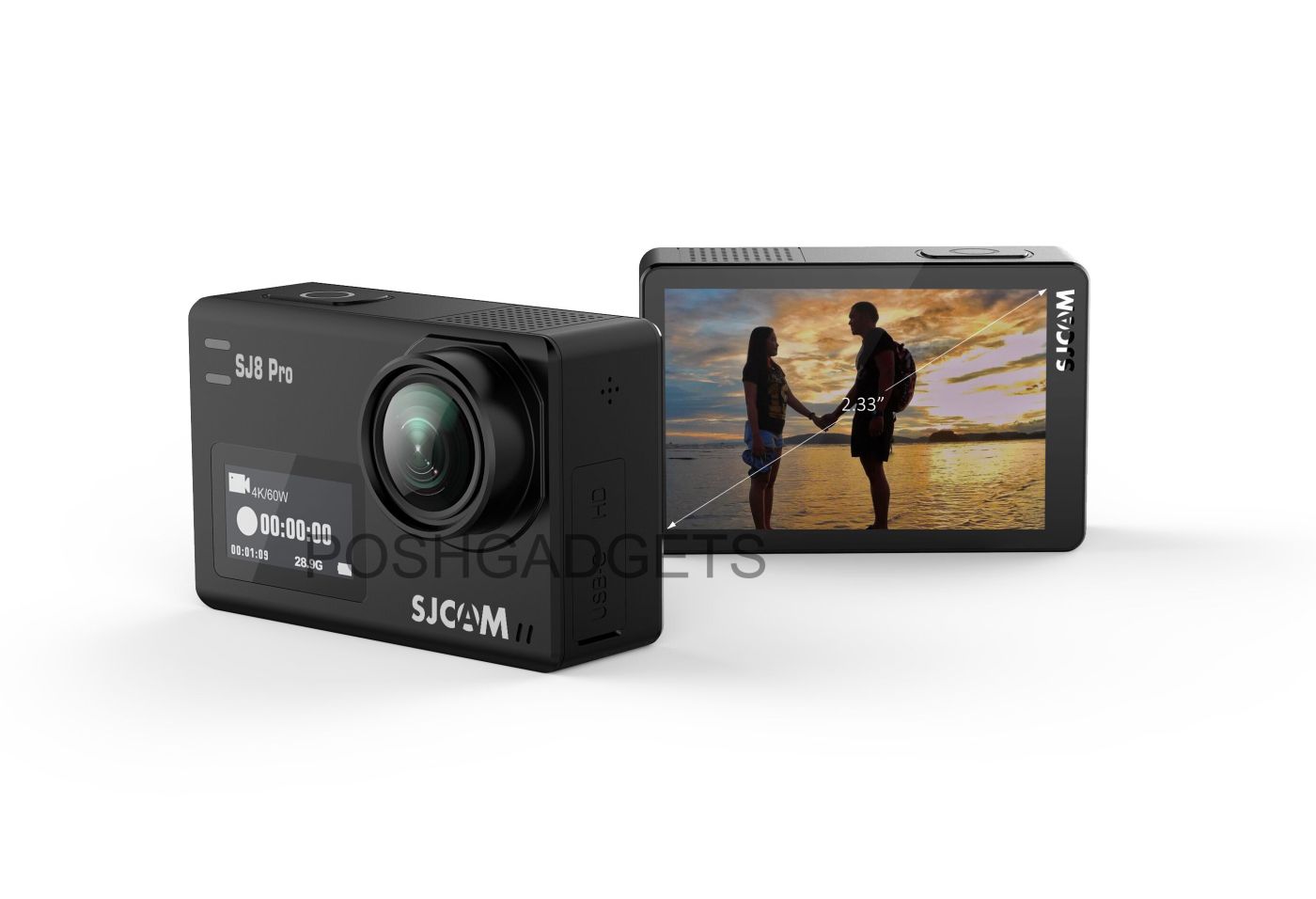 While the information is still pretty unconfirmed and scarce, we hope we managed to present the upcoming SJ8 series by SJCAM in the most comprehensive way possible. If you have more information or leaks about the cameras, please let us know in the comments. We will keep this article up to date and additional information we discover. Make sure to bookmark us and re-visit the article for updates.

While we wait for more information on these, check out our SJCAM category for more news and reviews, and do not forget to take a peek at our Editors’ choice – Best Action camera list.

The images from this article come from this source.