The AN7000 is the top tier camera from Andoer, a new brand. It’s not very famous like other brands but fame isn’t always proportional to quality. The camera uses an Ambarella chipset with the famous Sony IMX117 CMOS sensor. It could be a great combination, but… is it? 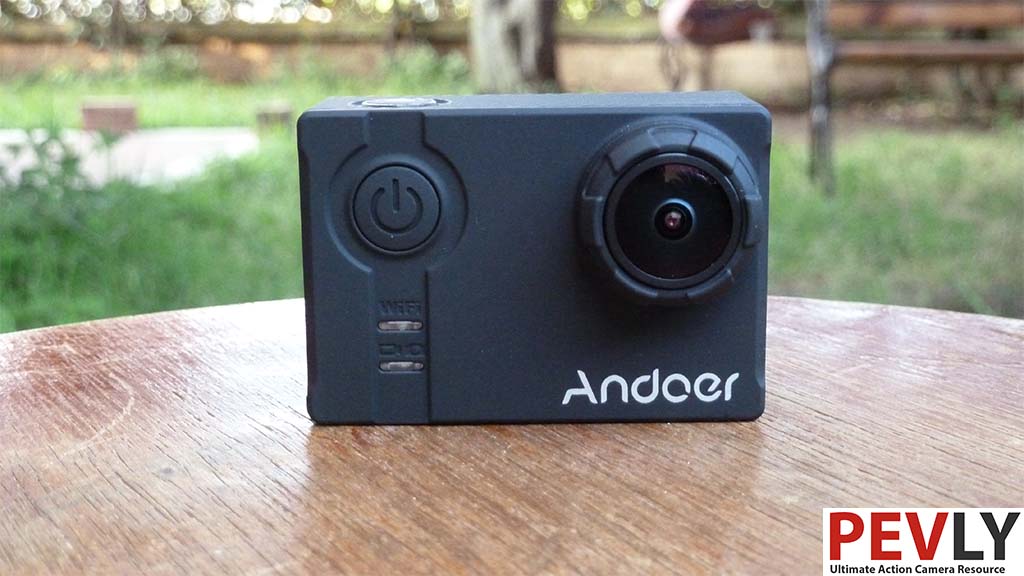 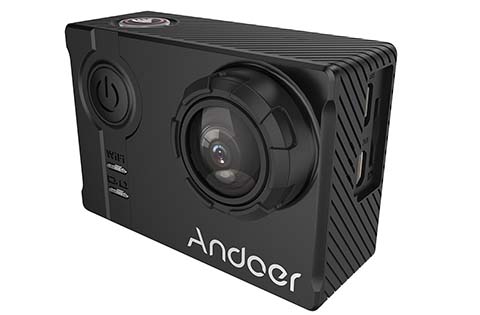 The accessories are medium to high quality and quantity compared to most Chinese action cam manufacturers.  Everything is fine apart from the plastic frame because it doesn’t fit. It’s smaller than the AN7000 and can’t clip around it. 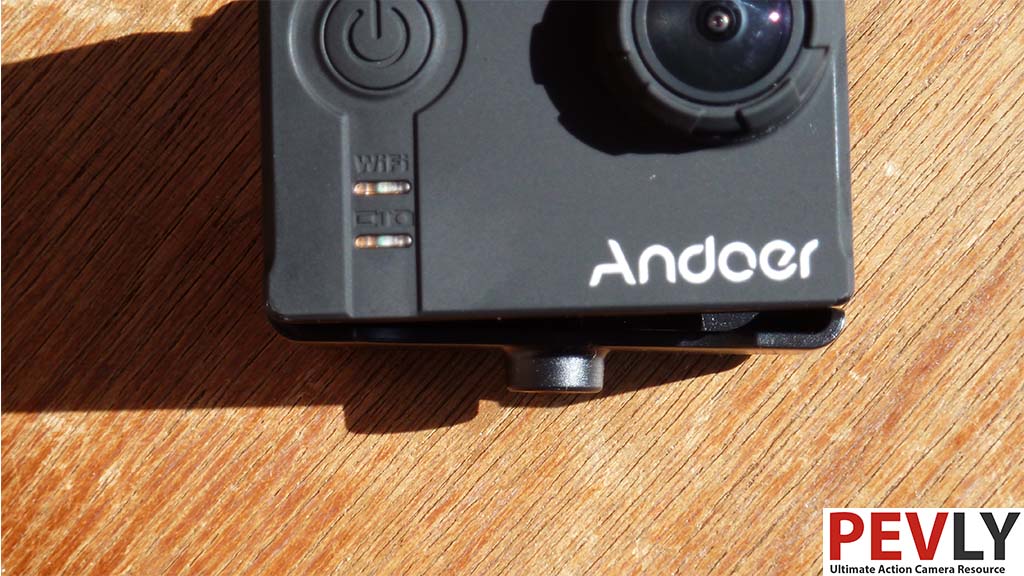 I also noticed it wasn’t created for this camera because the LED position doesn’t match with the frame.  It’s obvious they used a generic frame without checking if it could be used on this particular model. I think this is a huge oversight by Andoer. 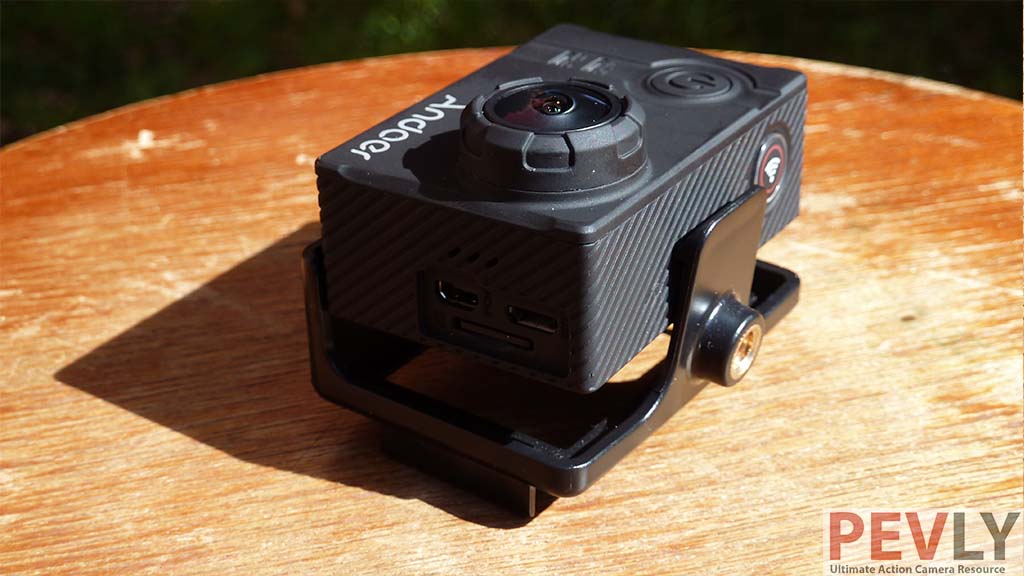 The AN7000 has the same shape as many other action cameras but has different details that give it a nice futuristic look. 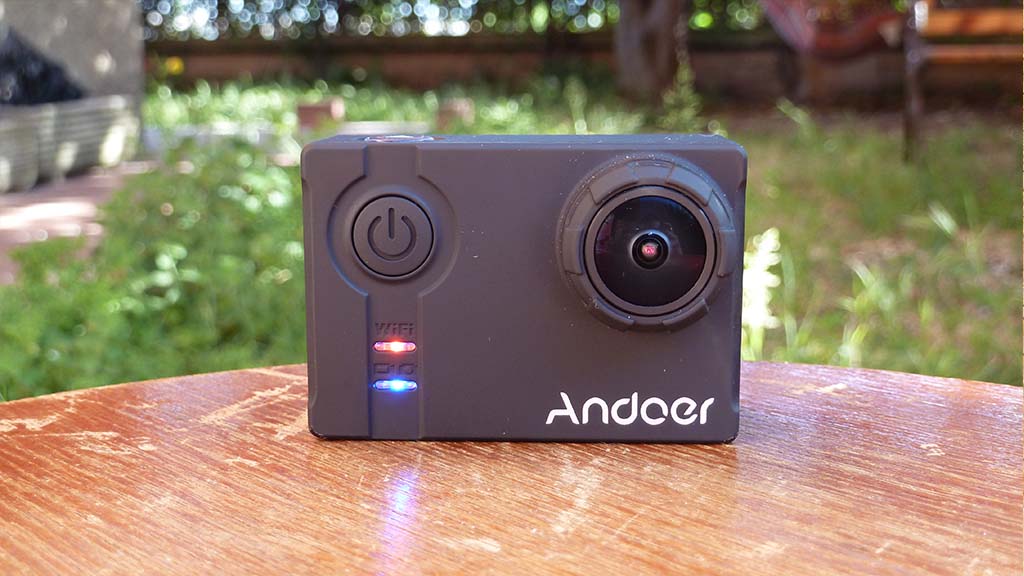 It has only one screen and it is positioned on the back. On the front face of the camera we can find the lens, the power button and two LEDs. The WiFi LED is positioned above the recording LED and both of them flash when the camera is recording or WiFi is on.

On the left are the usual ports for the SDcard, HDMI and USB. 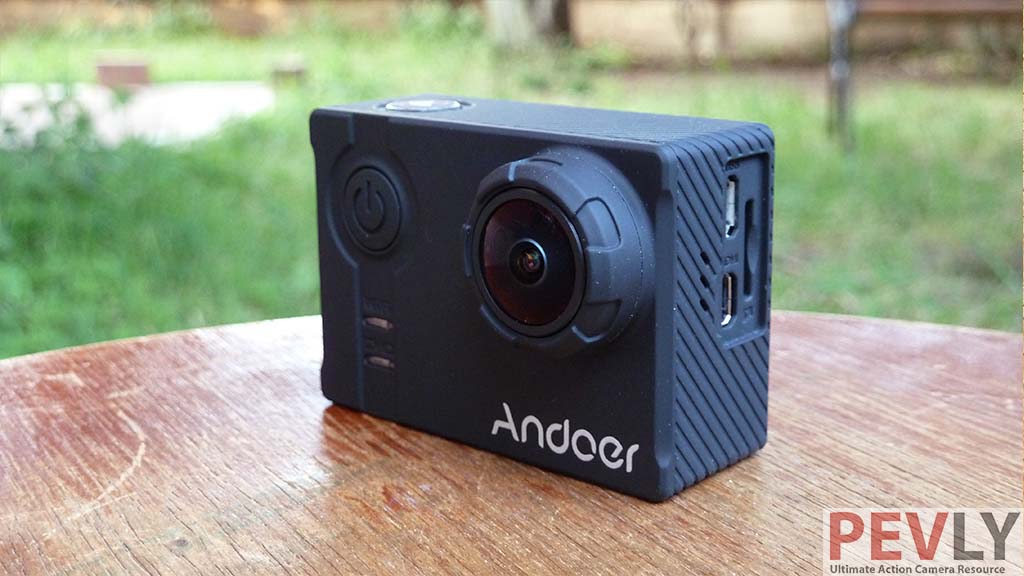 On the other side there are two buttons and they’re only used to navigate the menu. 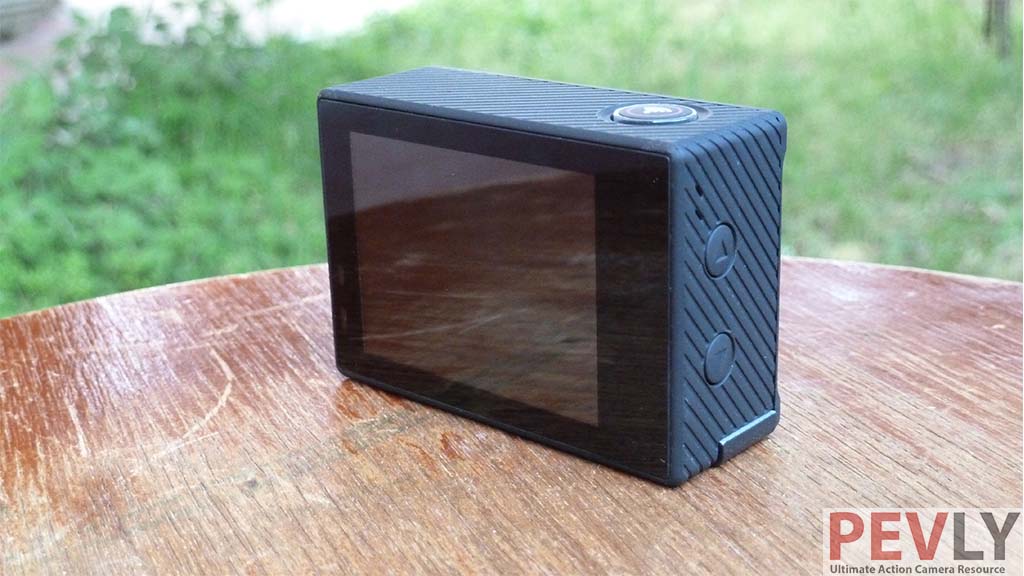 On the bottom you’ll find not only the battery door but a very useful threaded tripod mount! 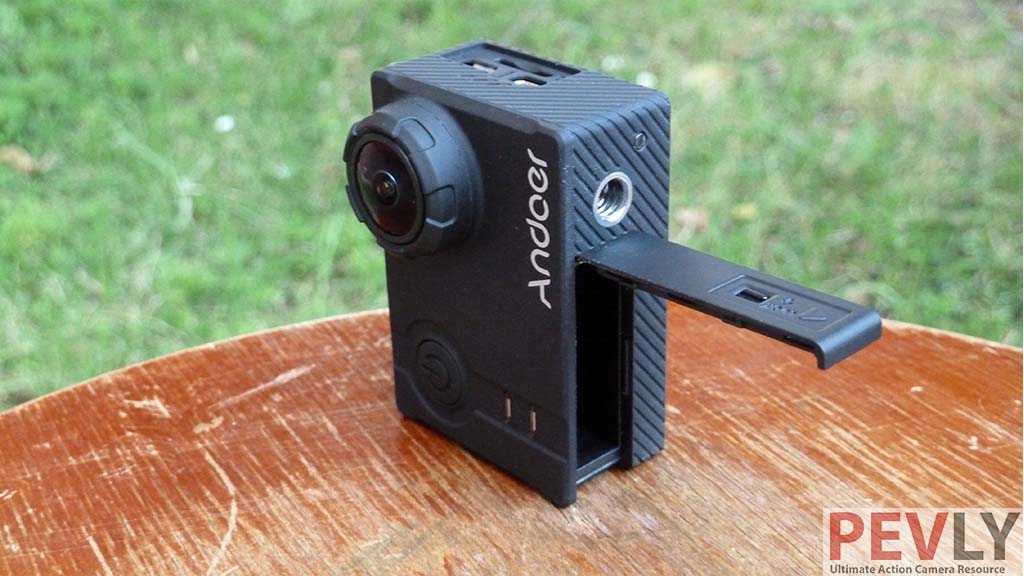 The LEDs are positioned all around the camera body and provide great light, impossible to ignore. The plastic is all rubberized and the feeling is very nice and provides good grip. The buttons are divided in two parts. There are two big ones, the power and record buttons, and two very tiny ones, the arrow buttons. The first two are very nice with a perfect “click” sound followed by a lovely “beep” from the speakers.

Little note: I’m in love with the record button 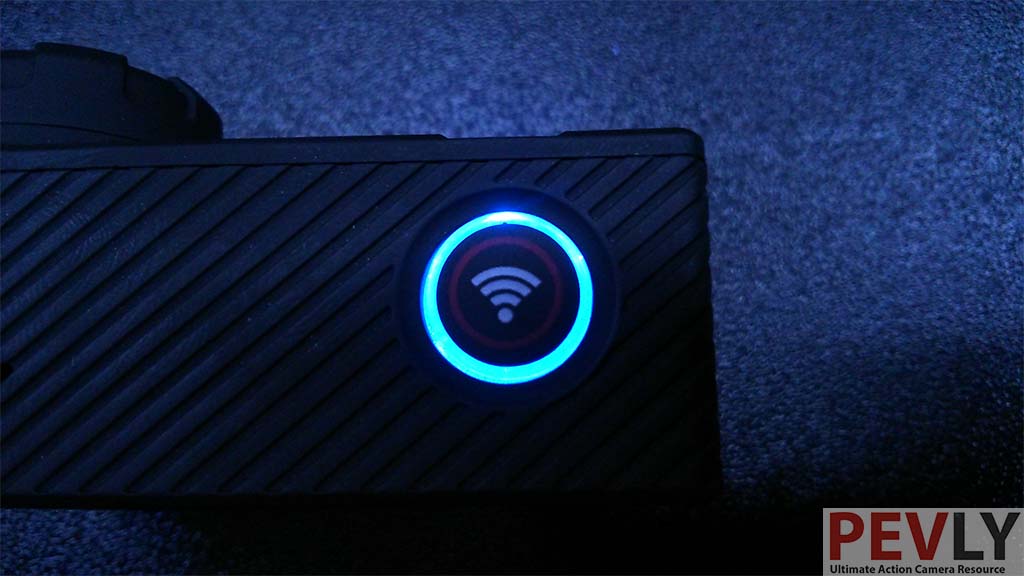 The other two buttons aren’t that good because they’re too tiny, almost invisible and very difficult to feel under your fingers. If you use a pair of gloves they are absolutely impossible to feel.  Apart from this problem the camera seems well built. 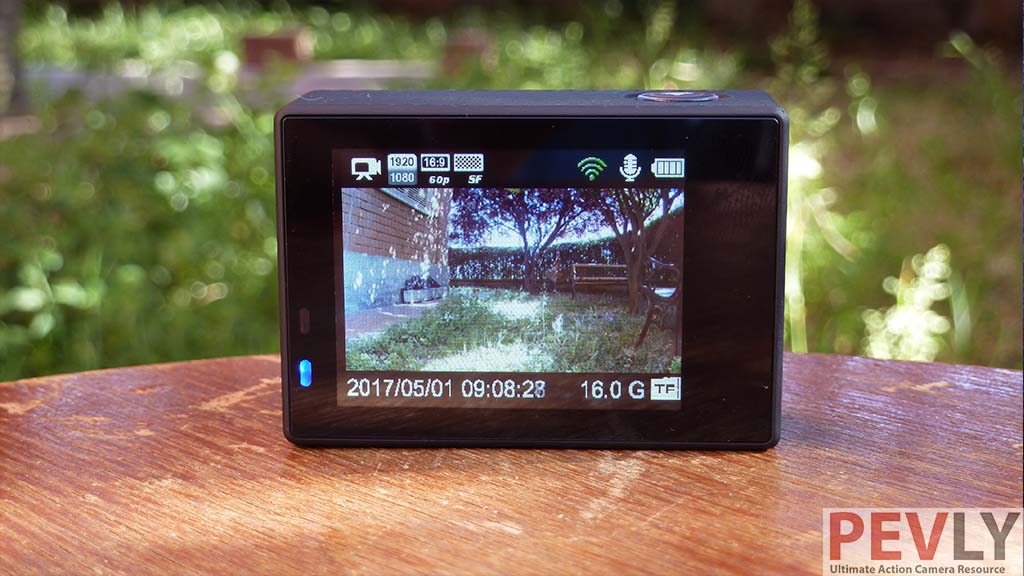 The feel and grip of the surface give the AN7000 a well built feel but these features are very bad for heat dissipation. The camera has a big problem with overheating even after few minutes of normal usage and it could be very dangerous for the camera and for you (in case of possible battery explosion).  After 40 minutes of usage as dashcam at 1080p 60fps the camera becomes almost untouchable ,mostly on the screen part, and in the long run it could be detrimental to the camera’s life.

Luckily the AN7000 has a simple menu.  Nothing is particularly strange and everything is clear. To navigate the menu the only thing you just press the power button begin your journey. The menu is composed of  five parts:

This means you must press the power button five times to enter Settings. That section is composed of:

When navigating the menu the operation of buttons is typical: With the arrow buttons you go up and down, the record button becomes the select button and the power button become the “back” button.

As you can see this camera has a HUGE number of settings but if you set all to Automatic the camera manages all of them perfectly!

The AN7000 is equipped with the Sony IMX117 sensor.  Some cameras claim to have the Sony sensor but are often just fakes.  In this case it’s genuine and capable of 4K. It’s used on the SJCam M20 but unlike the M20, and to my HUGE surprise, EVERY SINGLE RESOLUTION and FRAME RATE is right.

The 4K is real 4K, 1080p with 120fps is actually 120fps and 240fps with 720p resolution is actually 240fps. I never ever bet money on these settings being true but… this time it’s real!  Note that the frame rates automatically halve in dark conditions

With this absolutely great discovery, is the video quality also good?  Yes, it is.

The video quality is the second surprise of the AN7000: it’s simply great, probably one of the best cameras I’ve ever tested! It captures light perfectly and the colors are beautiful, full and vivid. The gyro stabilization does a gorgeous job and everything looks incredibly sharp!

This is an example of how it looks:

I also had the opportunity to test the AN7000 underwater. On this occasion the camera and waterproof case were tested to 20m underwater and they survived.  The manufacturer claims it can reach 60m.

Here’s an example of how well the camera manages colors:

It’s simply incredible. I made this test with the scuba mask pictured below.  It’s unique because it incorporates  an action camera mount. 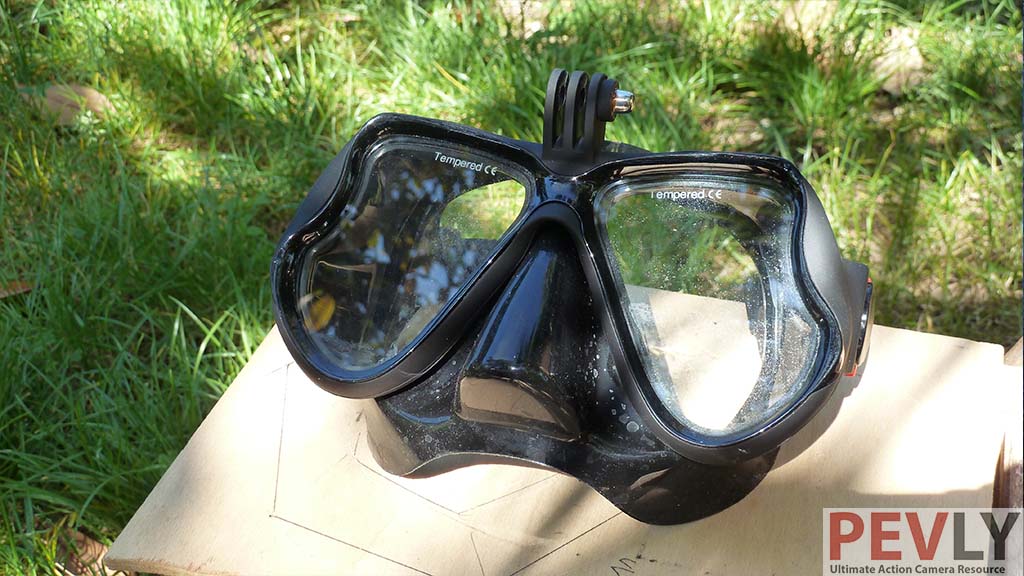 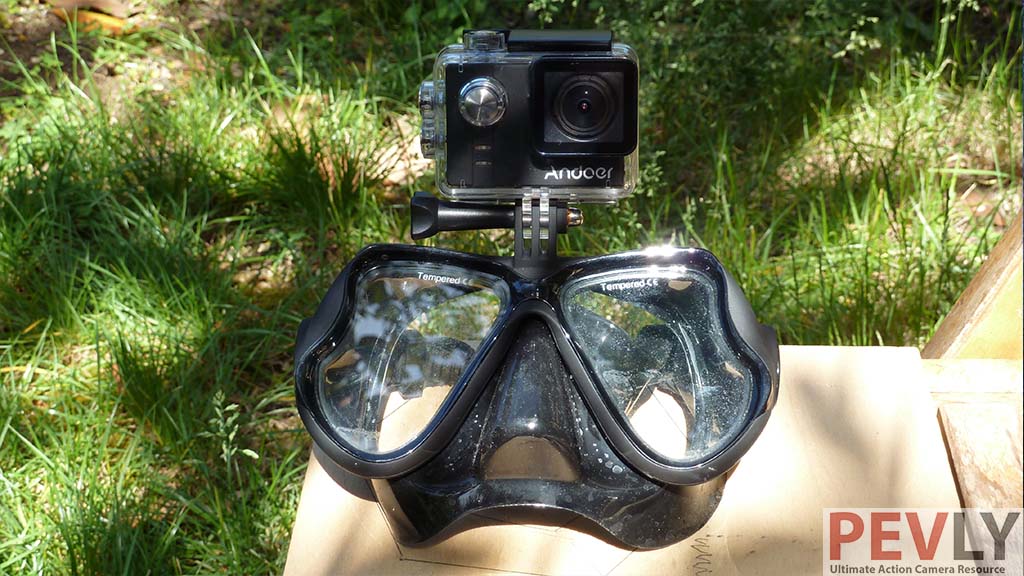 Here is my usual dashcam video

And the Bike test

This camera has a SuperView setting that significantly increases the view angle but also increases distortion. Here is a comparison: 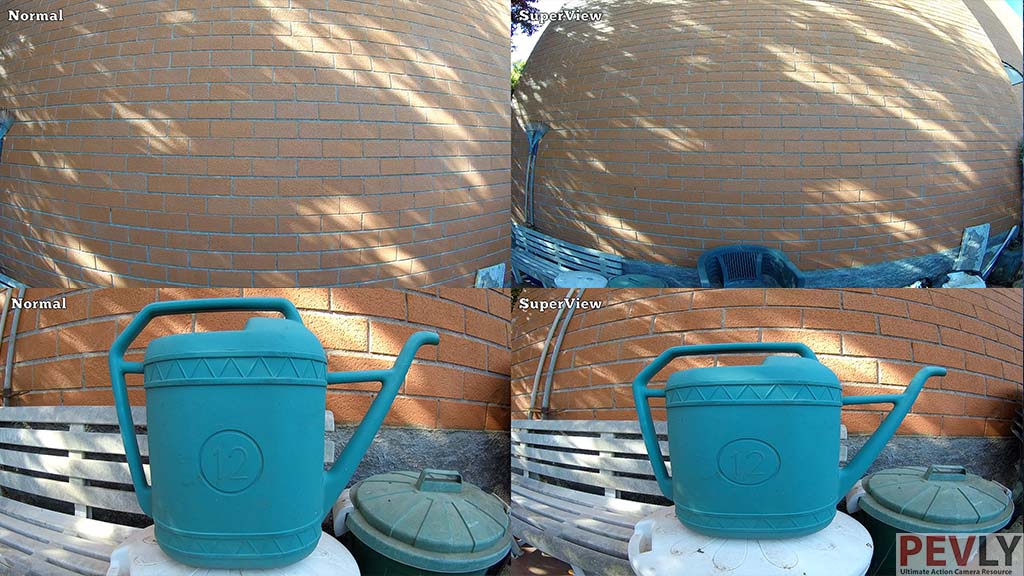 As you can see the camera makes great video in any conditions including at night.

Videos at night seem a little bit dark but they don’t haven’t ANY noise and are perfectly clear!

I noticed one very bad thing; when the camera is recording it gets very hot, enough to burn the skin. This no joke. After just a few minutes of recording it becomes very, very hot. I hope it doesn’t adversely affect the camera’s durability.

The above video tests were made without the stabilization on except for the bike video.

Photos are at the same level of quality as videos. This camera makes the best photos I’ve ever seen from an action camera. Usually action cameras are not made to snap photos because their main job is shooting good videos in any conditions. The AN7000 is able to shot photos better than some phones (at least mine).

It’s not a professional camera but it can satisfy the needs of many photographers.

The following is a casual photo made by mistake while I was writing this review and checking the quality:

If I zoom the image I can read screen with no problems!

With these  kinds of photos the Pevly Team hopes to present images in the most natural way possible without post production to modify the images. We present videos and photos shot using the camera the same way you would in everyday life.

Here are some more photos .  They speak for themselves:

The audio with the AN7000 is perfect. Yes, the audio is incredibly beautiful. I noticed that it can capture frequencies that other cameras don’t, mostly the lower frequencies. The audio is complete and full with a great mix of frequencies and is perfectly balanced .  It’s nearly impossible to distort at high volumes.

If you were thinking that is camera is perfection, well, you’re wrong because while the AN7000 has good hardware, it has absolutely poor firmware.  The following is a list of the worst defects I found.  Maybe some are not that important but some could ruin the usability of the camera.

This is an example.  I set the camera with the loop recording at 5 minutes so each file should have been 1.2Gb.  Instead this is what happened: 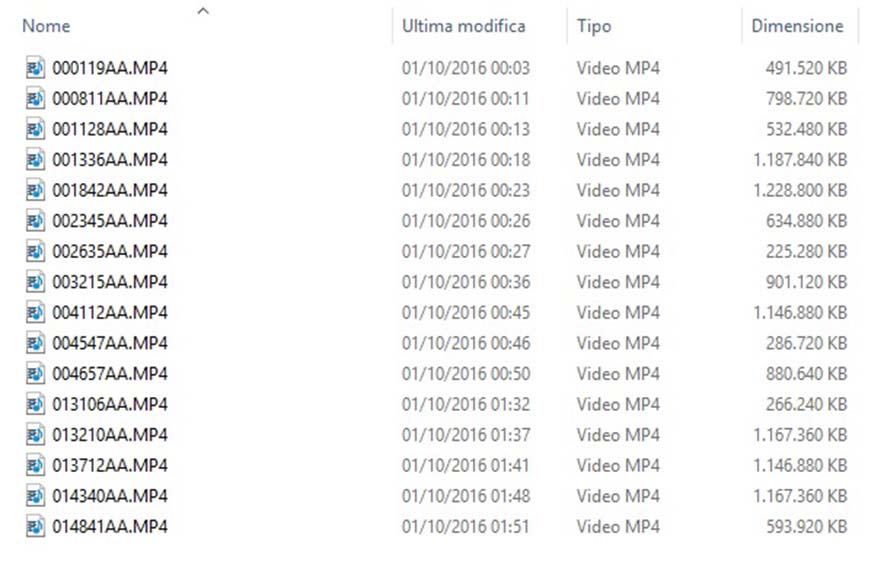 In this screenshot you can easily see the problem.

The camera has the first firmware, version V1.0, and I truly hope that Andoer fixes all these bugs because they ruin a good camera.

Here are the battery test results:

I couldn’t test battery performance for all resolutions because of the overheating problem mentioned previously. All times are with WiFi and Screen off.

The AN7000 WiFi works good when it can connect because it’s not a sure thing. Sometimes the phone connects to the camera immediately and sometimes not.  If not then you’re forced turn WiFi  on and off few times. Once the connection is established the app and WiFi work perfectly within 10m. I noticed that the WiFi is very fast.

In fact when you download a video on the phone it reaches 3Mb/s. Yes, you must download the video to see it on your phone because the app doesn’t allow you to view it directly from the camera, or rather the option exists but it doesn’t work. The result of touching playback to see a video is just a white screen, nothing more. This problem only showed up with videos because with photos it works great.

Bluetooth doesn’t work – I don’t know what to say beyond that. I tried it with five different phones ( Sony Xperia SP, HTC One, Wiko Iggy, Samsung J5, Samsung S6) but there is no way it connects to the camera.

The Andoer AN7000 is potentially one of the best Chinese cameras I ever tested. Probably it is on par or even better than a GoPro. It has great hardware and good components that increase the general quality of the camera. The main problem is the firmware because it’s a bottleneck for this camera. It’s like having a sport car with bike wheels: you can’t use it at maximum power. My AN7000 had version V1.0 and I hope that Andoer will release other versions to fix these firmware problems.

If you think Andoer AN7000 is right for you, you can buy it on this link (best price we found).

The AN7000 is the top tier camera from Andoer, a new brand. It’s not very famous like other brands but fame isn't always proportional to quality. The camera uses an Ambarella chipset with the famous Sony IMX117 CMOS sensor. It could be a great combination, but… is it? Let's find out! Specifications Unboxing https://youtu.be/gwEhjYNv1Us Accessories 1 * Action Camera with Battery 1 * USB Cable 1 * Waterproof Case 1 * Camera Housing Backdoor 1 * J-shape Mount 1 * Helmet Base 2 * Bicycle Mount 1 * Bracket 1 * Clip 1 * Fix Base 3 * Switch Support…
Andoer AN7000 Review – Good Cheap 4K camera
Andoer AN7000 Review – Good Cheap 4K camera
Alessio