Here we go again!  After our Elephone EleCam 360 review here we are talking about another new 360° camera, this time from SJCam.  As you can see from the image below from the SJCam website, the camera doesn’t have a real 360° angle but rather 360° x 220°. 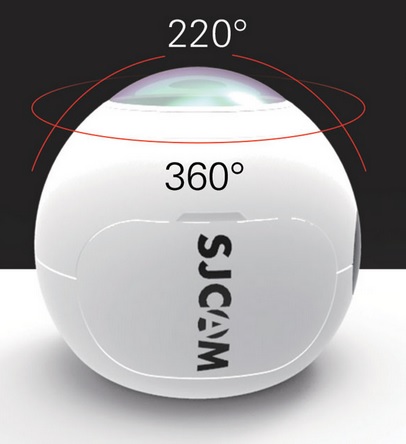 In plain words, with this camera you can’t see the front and back at the same time but only the front through a porthole – I’ll show you what I mean during this review. 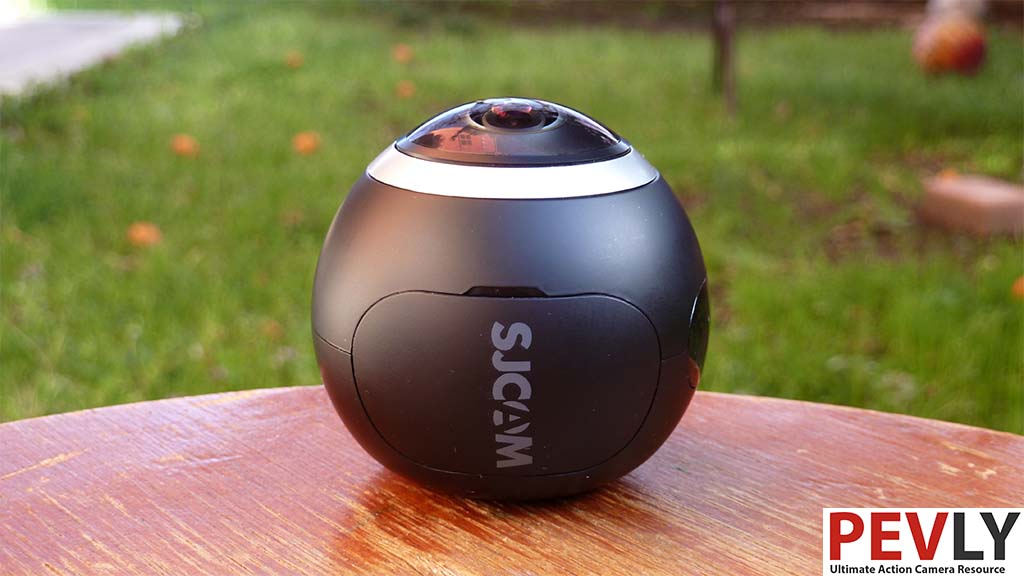 These are the specifications for the SJ360: 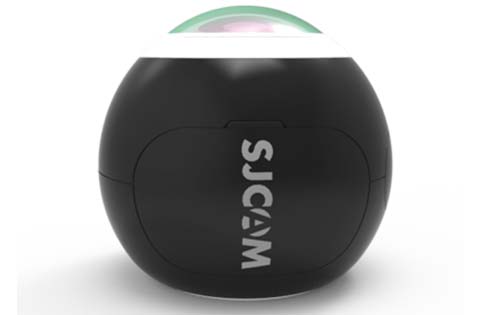 If you follow our reviews you already know that SJCam includes a bounty of accessories: 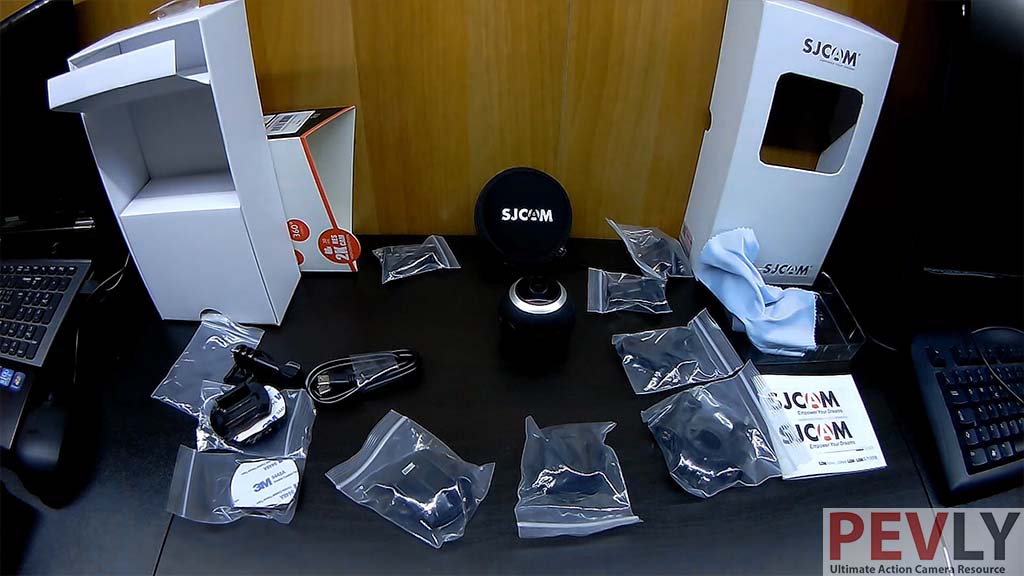 Let me mention two accessories in particular: the USB cable and the camera case.

First the cable.  I ‘m not sure what the problem is but it I can’t connect the camera to my PC with the included USB cable.  The computer won’t recognize the camera.  I tried the cable with other cameras and PCs but it was the same story.

The second one is just ingenious, something I’ve never seen before. It’s an easy, cheap and incredibly effective solution to protect your 360 camera.  It’s a small case with a carabiner that starts out flat but expands to a sphere to enclose the camera. 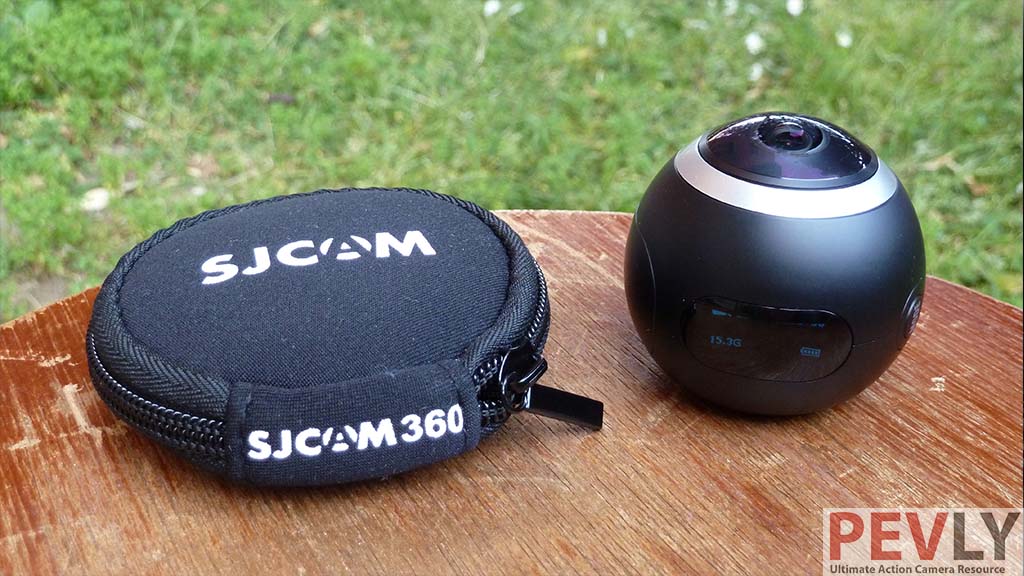 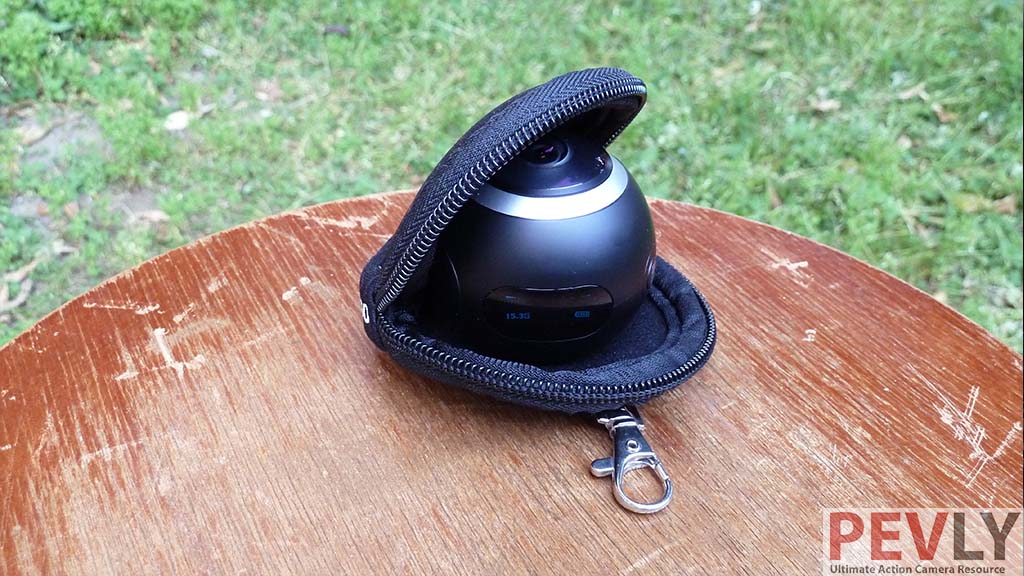 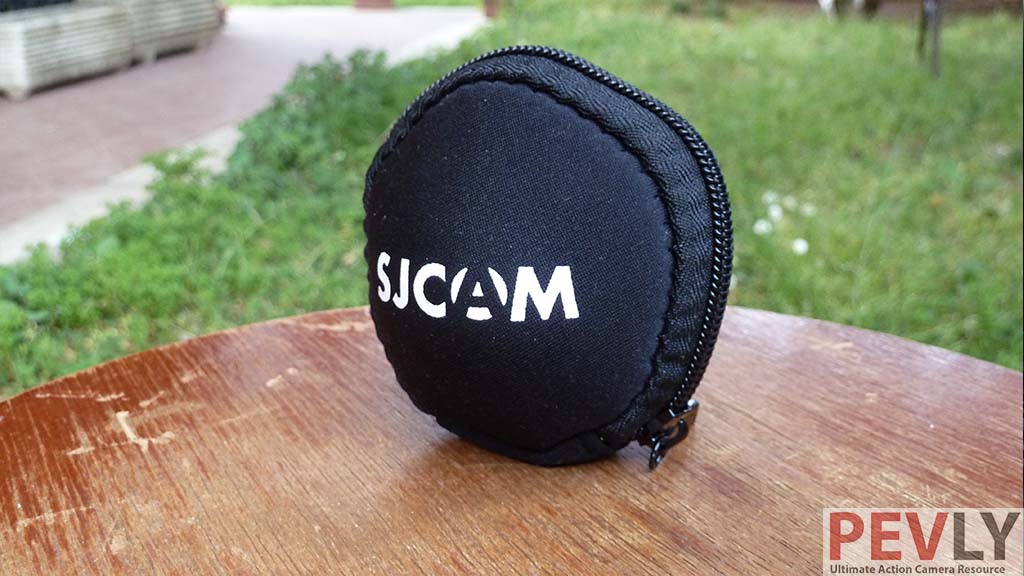 The design of the SJ360 is completely different from their other cameras.  First of all it’s round, not rectangular.  Second, you’ll find only two buttons, POWER and MODE. Honestly I found this design very nice but absolutely NOT practical. 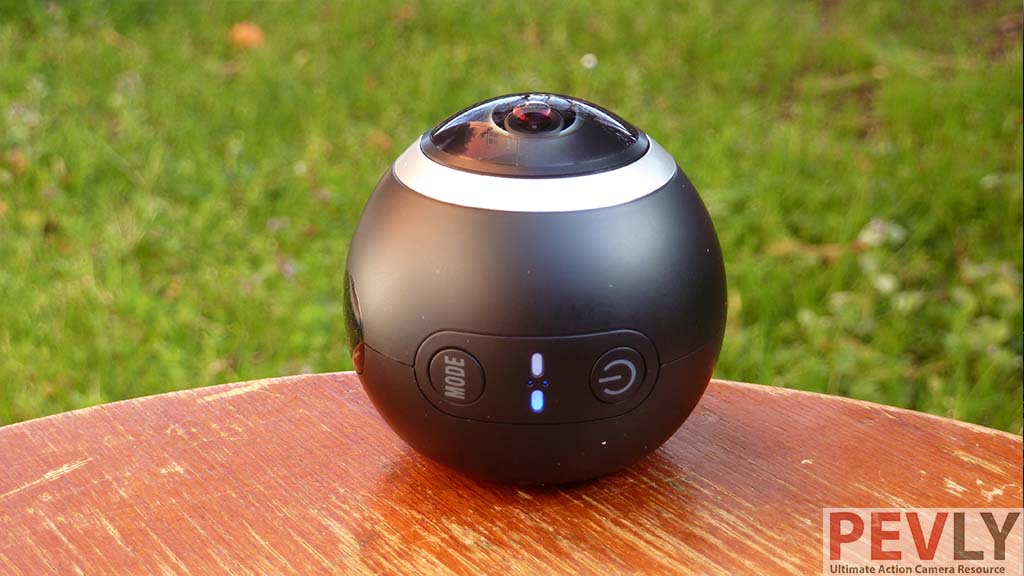 The  screen is nice.  It seems to be almost in 3D but only in dark conditions because in bright conditions it’s nearly impossible to read. 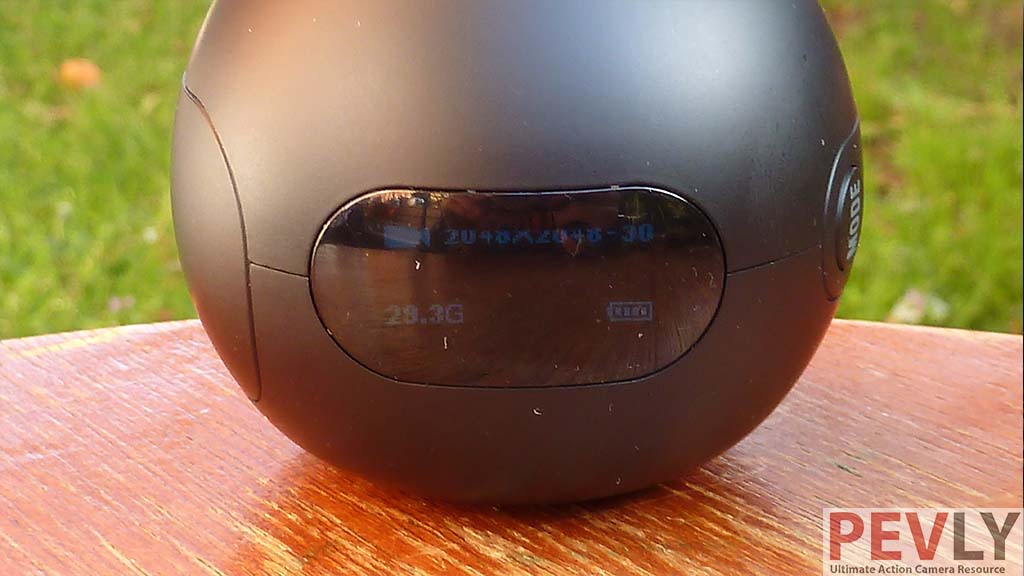 On the other side of the camera we find the connections door, where the removable battery, HDMI, USB and MicroSD card are placed. 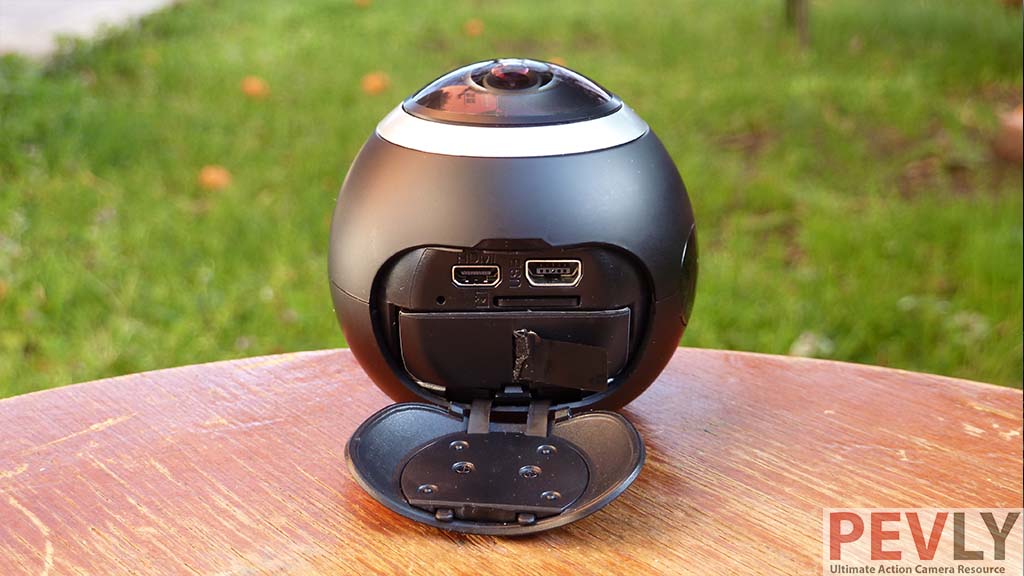 This part also has a problem.  In particular the closing mechanism is very fragile because it’s composed of only two teeth and to open it you must force them until they makes a sinister “click”. 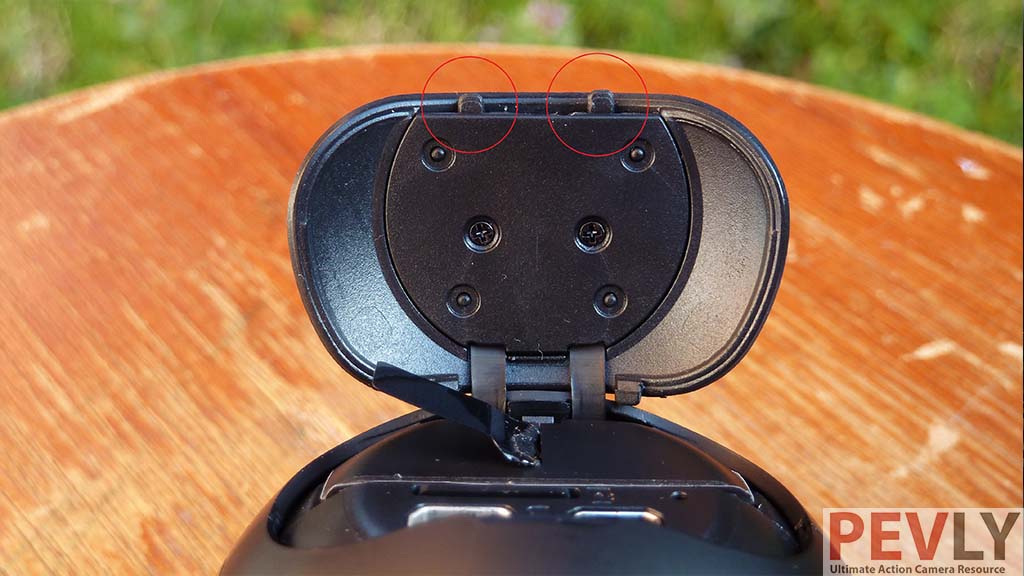 Another bad note goes to the integrated screw mount. The problem is the position.  Why?

Think about  it.  If this camera has the lens on the top and not on the side like other cameras, and the screw mount is on the bottom, how can you point the camera to the front? 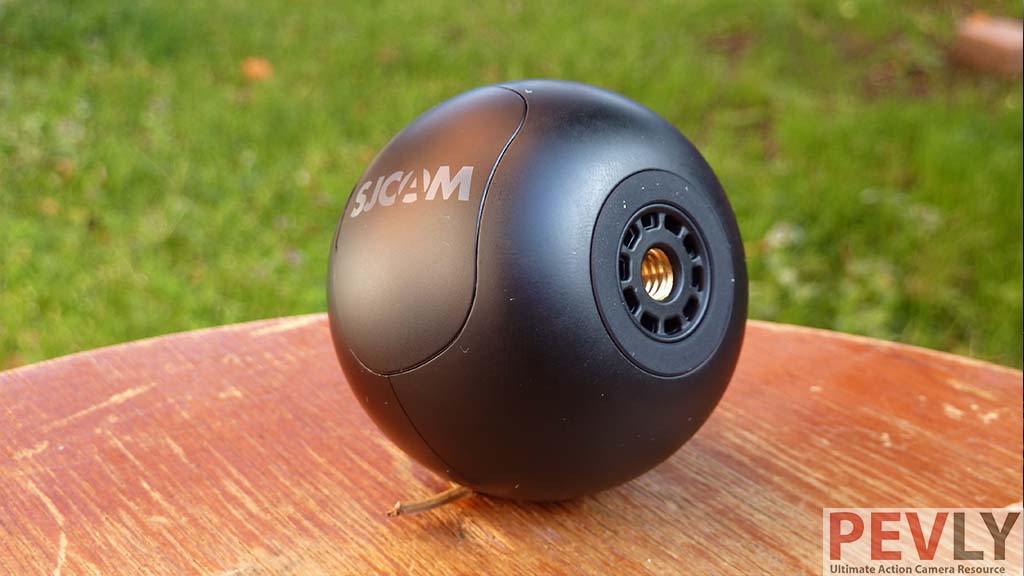 Well, the answer exists but it’s very uncomfortable and heavy! 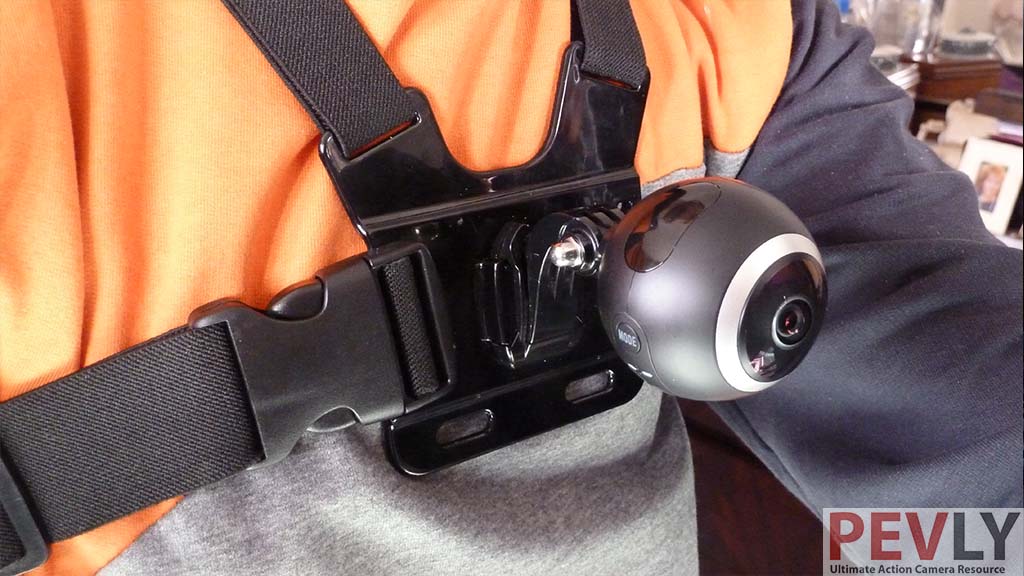 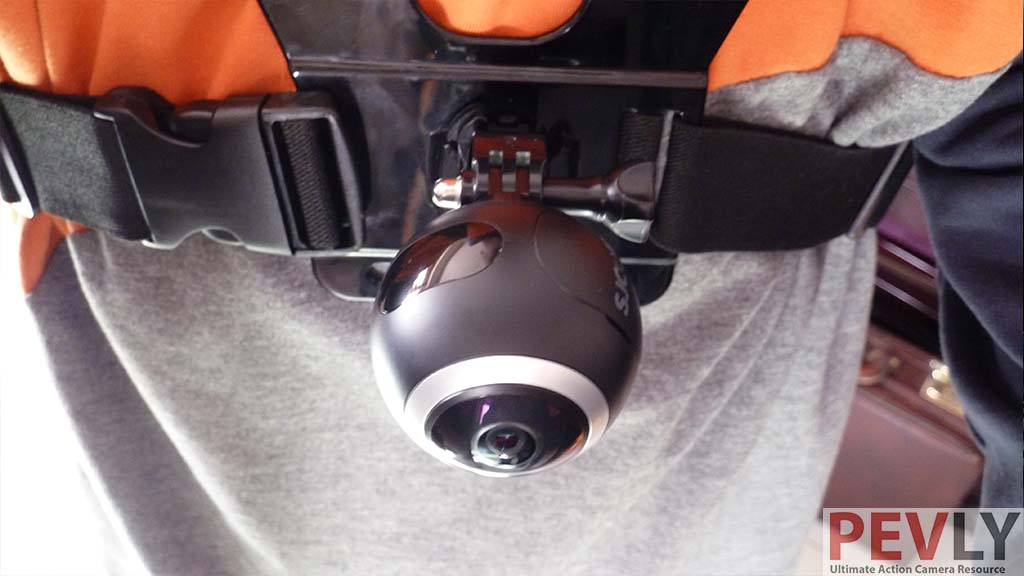 It’s also very unbalanced because the heavier part is on the top.  The effect is this:

Obviously it’s absolutely impossible to mount it on a helmet.  And because there’s no waterproof case or anything that can protect it from water, dust, or various shocks, it’s not recommended for use like an “action camera”.

The SJ360 menu is not as fast or intuitive as I thought. Usually there’s a helpful LCD screen but it’s a rare case when the camera has practically no screen.  The menu can be opened by pressing the MODE button. As always the first choices is the Mode menu, what I call the “fast menu”:

In Settings we can find:

As they usually do, SJCam did a good job with the SJ360’s video quality. Honestly I didn’t expect this kind of quality. Please don’t misunderstand me, this is a particular type of camera with a particular view and I’m judging it in comparison with other cameras of the same type.

It can shoot sharp videos thanks to the high native resolution, i.e., 2K (2048×2048). Yes it has a good quality but don’t forget that these kinds of videos are made through a “porthole”.  I like this term because it perfectly conveys the idea. This method of recording could be good for some but very bad for others – I can’t judge that.  In the settings you’ll find a few types of views but they are only for preview, not for the actual video, because it only records in “porthole” view.

I found the SJ360 to be a little bit lazy with light changes.  It takes a little too much time to change the exposure but it’s understandable due to the huge FOV.  Colors are still faithful to reality.  Apart from the minor exposure problem I can assure you that this camera shot incredibly good videos, almost on par with “normal” action cameras.

The SJ360 has no image stabilization but thanks to the super wide FOV it seems stabilized anyway.

It works great in dark conditions, having an incredible amount of definition and detail and an absolute absence of noise in the image.

Honestly I didn’t expect this quality from the camera.  I think that SJCam managed to pull out the best they could from this model.

The photos are also not as bad as I expected.  The SJ360 can’t be used like a professional camera but it’s not too bad.  The only problem is the exposure: sometimes it’s too high so it overexposes photos. 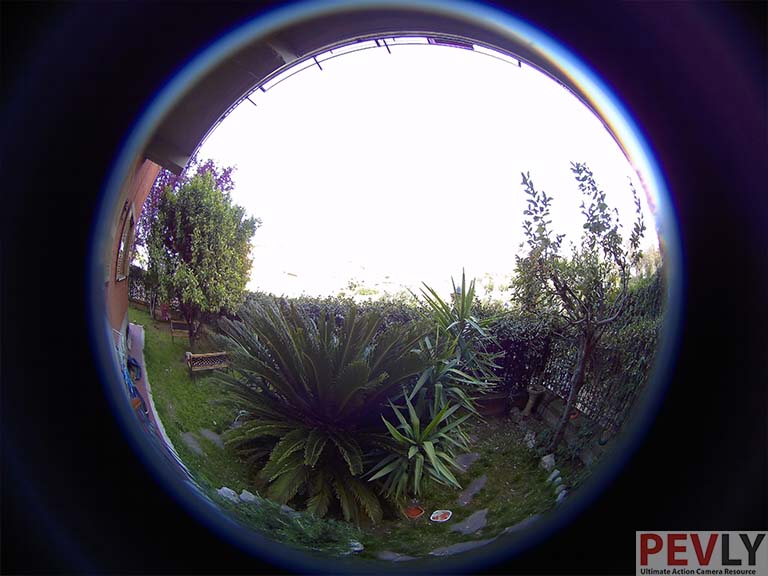 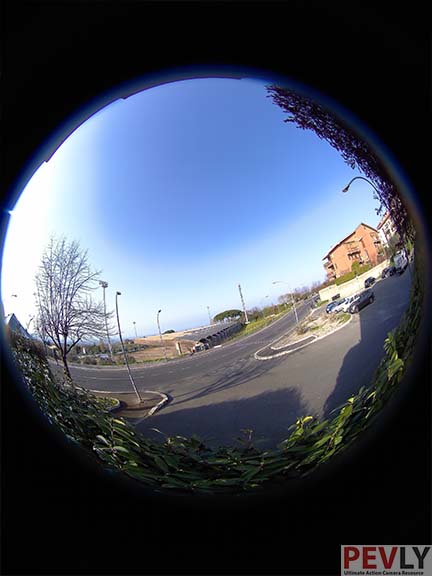 Recent SJCam cameras like the M20 or SJ6 have had great incorporated microphones.  To my great surprise the SJ360 model has very bad audio quality! I don’t know why they made such a mistake on this camera but it’s a shame. The main problem is the incredibly low volume.  It’s so low that it’s impossible to use to record something we actually want to hear again.

SJCam makes one of the best apps and WiFi hardware among action cameras. I can only say that the SJ360 is perfectly stable and the app works as well as other SJCams. 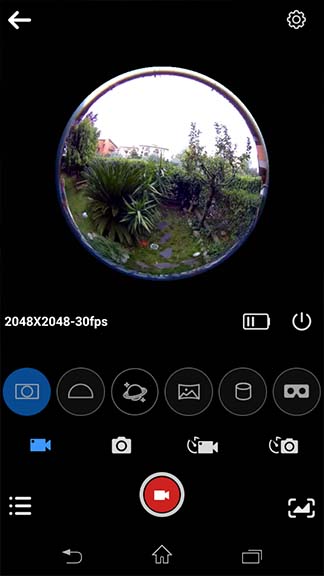 These are the results:

WiFi was off while checking battery times.

This time I’m not sure about my ending summary because  the SJ360 has a lot of high points and low points. It has unexpectedly good video quality and great battery life but all the other things are . . . not bad but uncomfortable. I don’t know if I can recommend it or not.  It’s a particular type of camera with a strange kind of view.  The decision really depends on your needs.

SJ360 camera can be bought on GearBest

Editor’s note : Before publishing this review we waited quite a lot. The reason for this is that the SJCAM told us they are developing a software which can make videos look rotating. Until this day, nearly 20 days after our initial email, manufacturer has not provided a stable software version which works. That’s why we simply can not verify that this particular camera can make rotating videos. We at Pevly have tried to find a decent software to convert videos (including third party ones) but not a single one worked. If something changes in future and manufacturer offers a stable and working version of a software, we will update this review.

Here we go again!  After our Elephone EleCam 360 review here we are talking about another new 360° camera, this time from SJCam.  As you can see from the image below from the SJCam website, the camera doesn’t have a real 360° angle but rather 360° x 220°. In plain words, with this camera you can’t see the front and back at the same time but only the front through a porthole - I'll show you what I mean during this review. Note : Buy SJ360 (special promo price) Specifications These are the specifications for the SJ360: Accessories If you…
SJCam SJ360 Camera Review
SJCam SJ360 Camera Review
Alessio