I admit. Lately, I’ve been in some scary dark places of the world wide web, trying to find an action cam which looks different.

If you’ve been following the industry lately, it appears that 80% of the sports cameras look like a GoPro. The majority of them have the matchbox or cubical shape. Kinda boring, right?

Today I woke up with a single mission in mind – to find the most unconventional, weird or simply ugly as hell action camera. So, I started digging. Boy, you won’t believe where I’ve been and what I’ve found. There are some scary places out there.

Enough. Lets cut to the chase already. In this article, I will present different, weird, funny or just ugly action cameras I’ve found. The cameras are listed in no particular order.

Targeted at bicyclists, the QX-02 caught my eye not only because of its shape but also because of the fact that it has a LED lamp and insanely long battery life.

According to the technical specs, the camera uses 6600 mAh battery. That allows users to record up to 14 hours in video mode, 6~10 hours in LED mode and 4-5 hours when the camera is recording and using the flashlight. Speaking of the flashlight, QX-02 Y-66 utilizes 600 lumens LED light.

You thought that was all? Well, how about this: with a 5V 1A output, the camera can be used as a power bank. 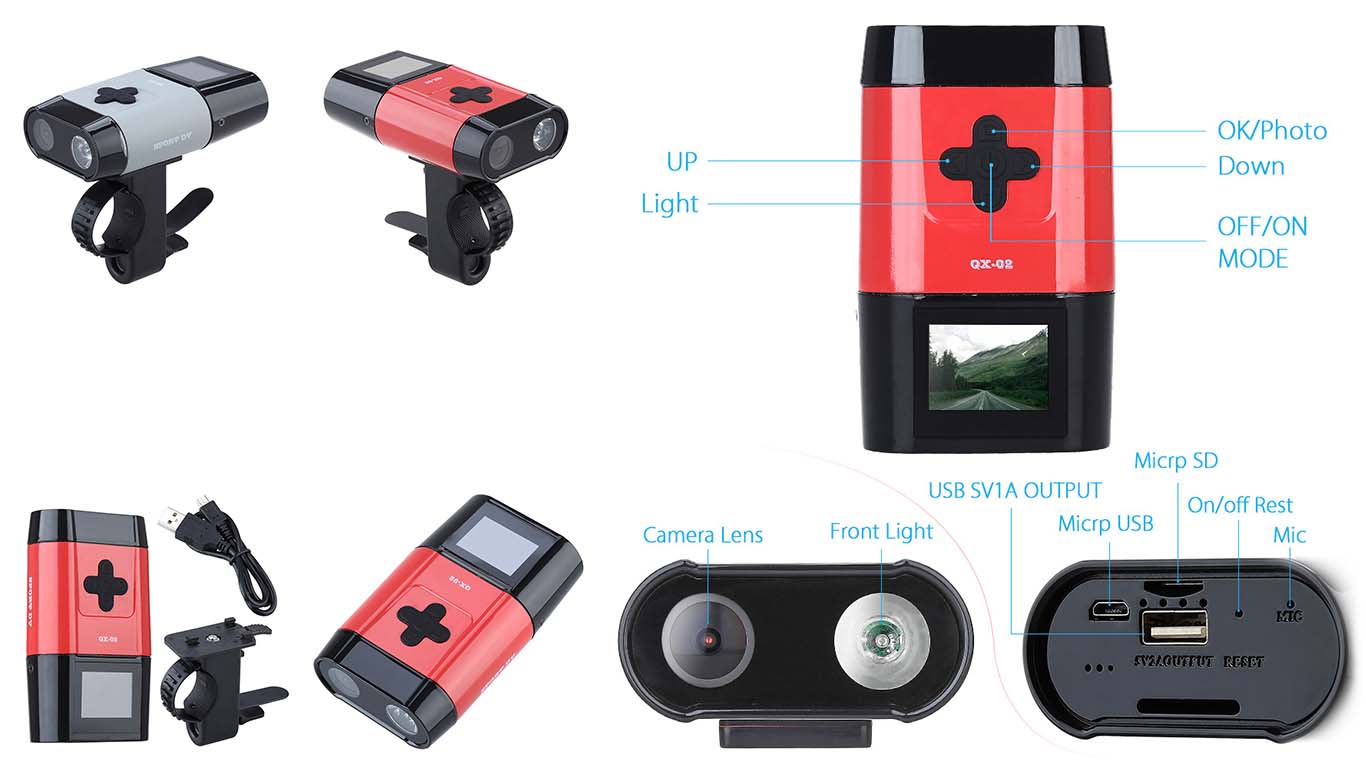 With all those features it sounds that you’re getting quite a lot for just 60-90$ price. However there are no tests of this camera, nor the videos online, so it remains a mystery whether or not it is too good to be true.

You can see more details about this model here.

VTech Kidizoom – a GoPro for kids

If you do not wish to break the bank and buy your kid a proper action camera, you can get them the Kidizoom. VTech made this camera with kids 4-9  years in mind. Simple user interface and quite colorful design will certainly look appealing to the youngsters.

The camera arrives in three colors: yellow, pink and green/camouflage. The accessories included will be more than enough to get your little angels up and running. With the waterproof case, they can go down to 6′ underwater.

From the technical point of view, it’s far from impressive, though I’m sure youngsters are not much interested in that. Maximum video resolution is a disappointment – 640 x 480. The camera takes only 0.3MP photos. It has the 1.4-inch screen and supports up to a 32GB memory card. The battery is not removable. Kidizoom retails at 49$.

Boblov 4K – Taking selfies to the next level

Plenty of people out there enjoy taking selfies with their action cameras. Problem with selfies and sports cameras is that it takes lots of practice to get that composition right. Boblov 4K camera solves a problem of capturing selfies by implementing a front LCD 1.5″ screen.

With this cam you’ll be able to see yourself and take obviously better-composed selfies. Since the camera is not a dual screen camera, it has no back LCD, which makes it hard for all other photography, especially the landscapes.

A bit unpolished design of the Boblov 4K won’t be appealing to design freaks, including myself.

If you’re interested in detailed info on Boblov 4K, check this link out. We might even review this one soon. I also noticed that there’s a similar camera on the Amazon.

The concept of a pocket camera that can stick nearly everywhere is not new. Company called PodoLabs launched their Podo camera in 2015  on Kickstarter.

Crafty Chinese began “borrowing” the idea somewhere in 2016 and launched few more similar looking cameras. Two one caught my eye is SooCoo G1.  It looks exactly like the Podo but has better specs and an “awkward “arm” extension, which makes the camera look like Mike Wazowski from the Monsters, Inc. – Pixar’s animated movie.

Besides monstrous look, camera has 5MP image sensor, 125 degree wide-angle lens and a battery life of 90-120 minutes. One of the most interesting features is the remote controller support.

I first heard of Foream brand, when I had a chance to review their futuristic X1 camera. At that time this was one of the weirdest sport cams I have tested, so I decided to put it on the list here, as I’m sure many of you never heard of it.

Some of the notable features are 1080/30FPS, earphone plug, external mic support, voice hearing command and the fact it looks weird. You can read more about this wearable camera here.

Not many action cameras on the market target female population. Qlippie is one of the exceptions. By having plenty of trendy colors to choose from, this wearable camera weighs only 45g. Sized at 48 × 48 × 19.6 Qlippie is certainly one of the smallest and most lightweight devices on the market.

The name Qlippie derives from the clip and go mechanism it has, which enables easy mounting to the clothes. This clip camera has 1/3.2 inch SONY CMOS R image sensor, 122°, wide angle lens, a dual microphone and a built-in WiFi. It can record videos in 1080p 30fps.

You can get Qlippie for around 99$ on Amazon.

This is the camera I discovered by browsing through AliExpress. It is advertised as a combination of sports and dash camera with a focus of a “black box feature”. It sounds quite cheesy, but the main selling point of the camera besides it’s form factor and ease of attachment is the fact it can serve as a “black box” in an airplane, which is to capture any accident. Ouch. 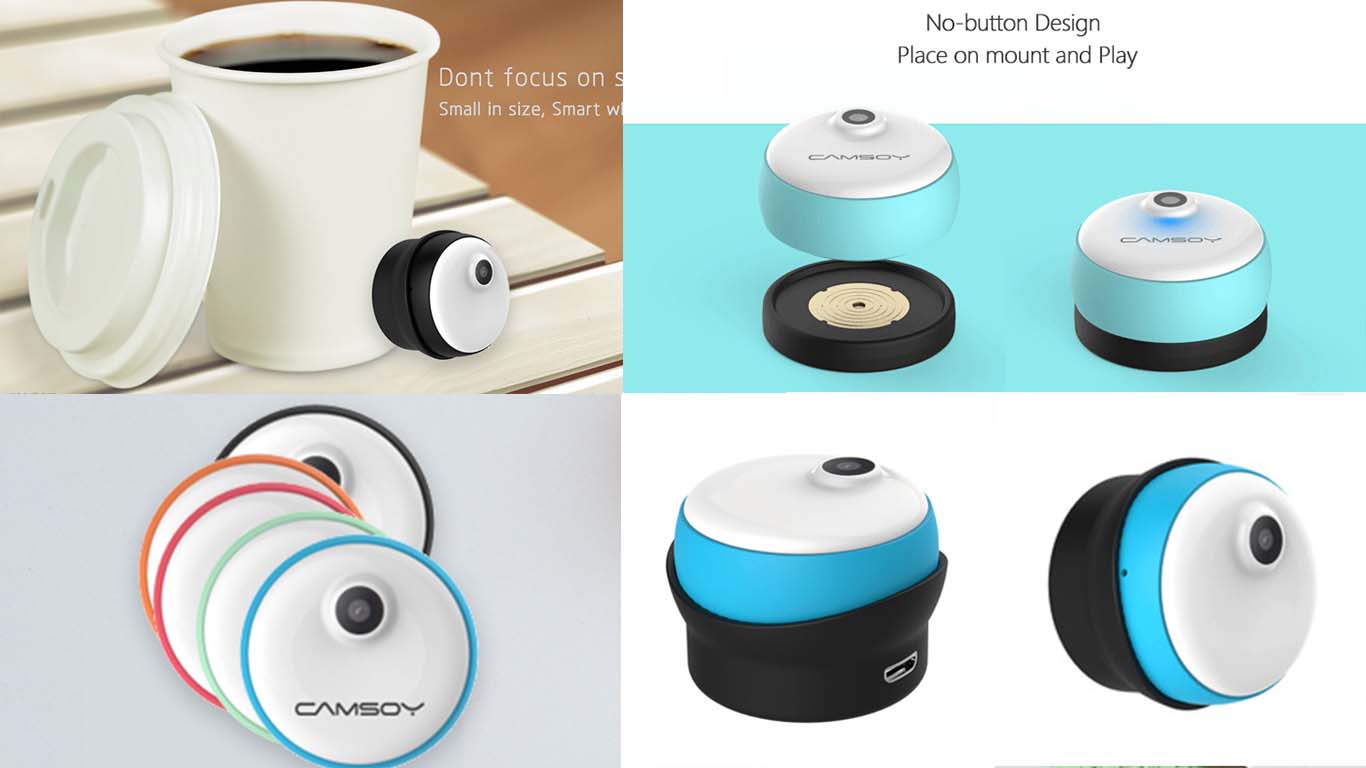 What I personally found interesting is that, thanks to it’s USB attachment, it allows you to view videos on your phone directly via the OTG. Furthermore, it has a 8GB built in storage, so it does not require you to buy a memory card. CAMSOY M1 arrives with plenty of accessories in the box. The angle of the lens is 90°, which some wide-angle lovers won’t like. The max video resolution is 720p.

I nearly forgot to mention the fact that camera has no buttons, it’s very simply designed. It starts recording when you attach it to the magnetic clip. It can also record while charging.

If there’s a camera that looks like a submarine, it has to be this one. It comes from a generic brand and I was unable to find much about who the manufacturer is. This metal-shell camera is built inside its waterproof case, and can’t be pulled out. It is therefore waterproof to 40m, according to the specs.

The (eBay link) F66 is very unique looking camera. It is basically frontal and back camera in one, which allows you to record in front and on the back.

From what I see in the images, it apparently has a switch, so you can switch back from front to back. F66  appears to be a generic brand, but brands like Boblov and SooCoo sell it under their re-brand.

Since there are plenty of these out there, I do not wish to emphasize only one brand. Therefore there are several types of action cameras which can fall into this category. Whether they are weird, cool or really functional, I’ll leave it up to you.

Basically, these can be worn on your head and record. The difference is, some can be used for skiing, some for diving, snowboarding, etc.

Here are links where you can get them or just find out more :

Do you know of any other awkward-looking action cameras?

If you are aware of any other interesting, awkward, creepily designed sports camera, feel free to leave a comment. I hope you found the article amusing and that it helped you discover how action camera market isn’t that boring after all. If you are looking for conventional action cams, check out our reviews and best action cameras we tested list.