If you want an affordable full-size drone with intermediate-level features, consider the Syma X8C Venture. The X8C Venture is one of the larger drone models made by a company that specializes in smaller, inexpensive drones. The X8C Venture resembles the more fully-featured DJI Phantom 3, but Syma cuts a few corners to keep the price low. 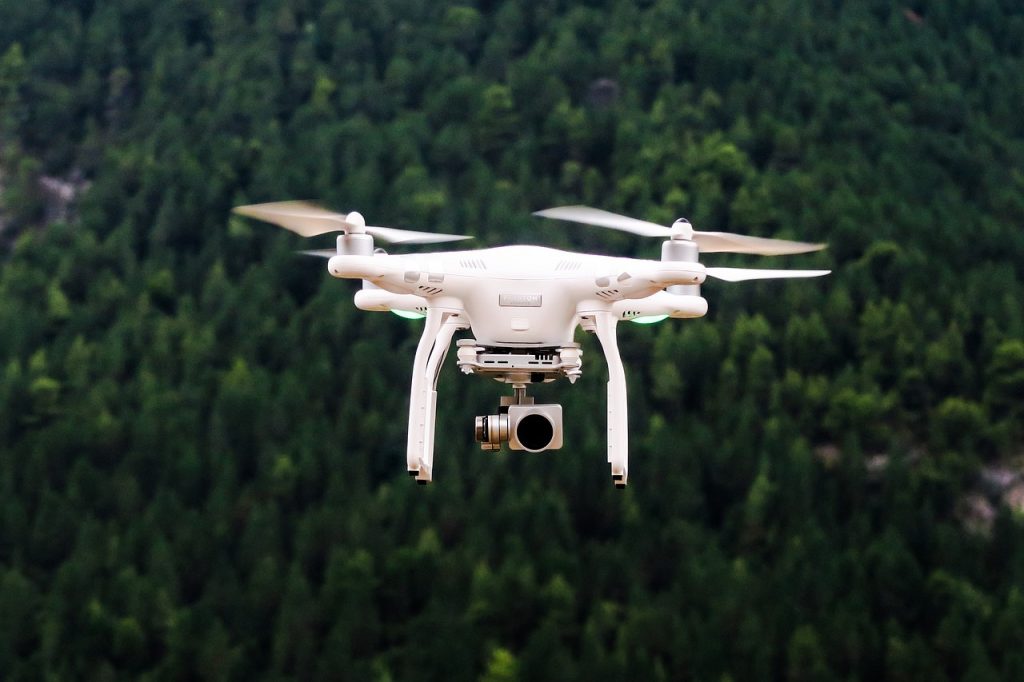 What Is the Syma X8C Venture Drone? 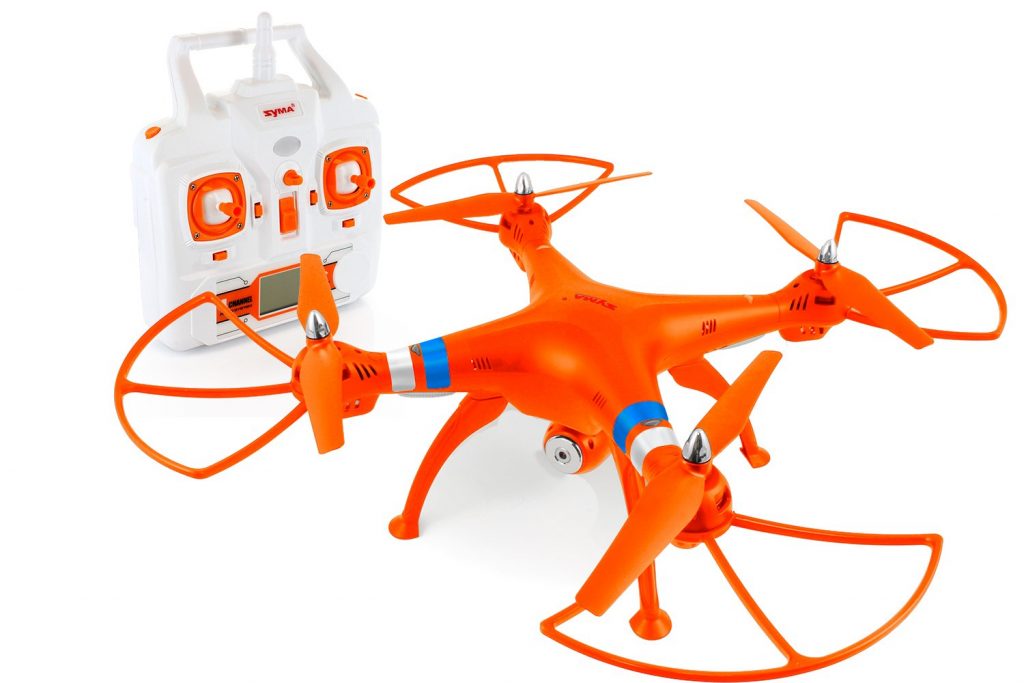 The X8C Venture drone is a four-channel remote control quadcopter. This model features six-axis gyro flight stabilization systems and several basic flight modes including standard, headless mode with the brand's Intelligent Orientation System, and flip mode with the 360 degree Eversion continuous roll functionality. This quadcopter also comes with a 2MP HD camera and 4G memory card that inserts into the back of this detachable camera for saving pictures and recording video while flying. This is not an FPV-capable model.

The X8C Venture is a perfect drone for intermediate pilots, but may be too large and unwieldy for beginners. Safety features such as blade guards help to protect this craft in the event of a collision, drop, or fall. This model is operates more quietly than previous Syma models and can withstand more wind than lighter-weight drones, performing responsively in winds up to 10 miles per hour. 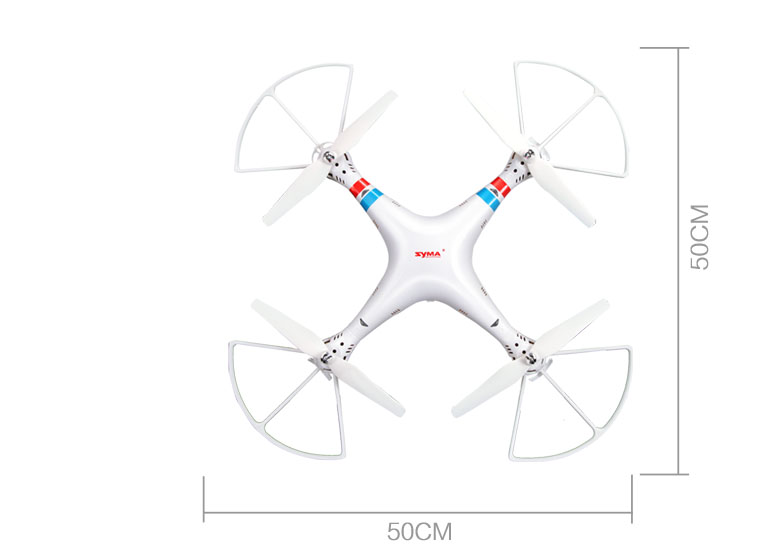 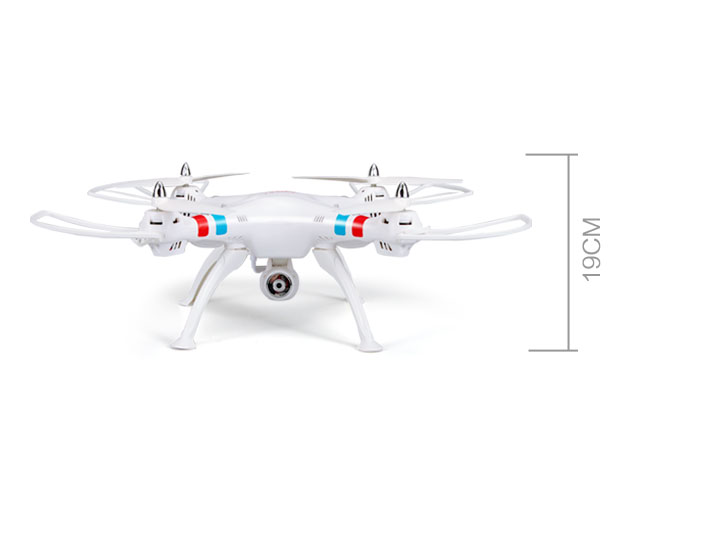 This Syma quadcopter model measures 50 centimeters (19 inches) long and wide and 19 centimeters (7.48 inches) high with blade guards attached. The drone itself weighs 450 grams (15.87 ounces) and goes up to 600 grams (21.16 ounces or 1.3 pounds) with blade guards. Intermediate-level pilots find that the larger size and directional stabilization technology enable this model to fly smoothly and maintain stability.

Syma keeps the cost of the X8C Venture quadcopter down by relying on brushed coreless motors and a basic flight control system. This drone also does not include built-in GPS. The range of this model is approximately 100 meters (328 feet). The flight time with a fully charged 7.4V 2000mAh lithium ion battery ranges from five to eight minutes. Keep these factors in mind when planning flying sessions. You may also want to purchase and charge additional batteries, as it takes about 180 to 200 minutes to fully charge these batteries.

Choose from three colors of Syma X8C Venture drones including white, black, or orange. Each model features different accent stripe colors. The white X8C Venture features blue and red stripes on the frame, the black model has yellow and red stripes, and the orange model has blue and white stripes. The rest of the frame, propellers, blade guards, and landing skids are the primary white, black, or orange color. The propellers on this model are about nine inches long.

In addition to the main frame color and accent stripes, every X8C Venture model also features red and green flashing LED lights on the bottom, which contribute additional color and make the craft easier to see when flying in low-light conditions. The Syma brand name is printed in red on the center of the canopy on all X8C Venture models, and the brushless motors are silver on all models.

Blade guards or protectors enhance the ability of this model to sustain collisions or drops without damaging delicate quadcopter blades. These protectors are available in white, black, or orange, depending on the color of the drone. You can purchase these replacement parts separately or in combined parts kits with blade propellers and landing skids. These guards add 150 grams (5.29 ounces) of weight to the X8C Venture and only extend about one inch beyond the propellers, which may cause propellers to rub against guards. Experienced pilots may find that this craft performs better and flies for longer without prop guards.

Syma keeps the cost of this drone down by including a basic flight control system and leaving out GPS technology. Some users complain that the remote control transmitter becomes disconnected from the onboard receiver, resulting in loss of control or models that uncontrollably fly out of range. You may want to add an aftermarket GPS tracker to your X8C Venture, but keep in mind that any additional features will add weight and affect the aerodynamic design.

When it comes to replacement parts, you may find that the Syma X8C Venture is compatible with DJI Phantom parts. Make sure that the parts you choose are sized to fit this drone. In general, you may save money by purchasing parts intended for Syma quadcopters instead of more expensive Phantom accessories. 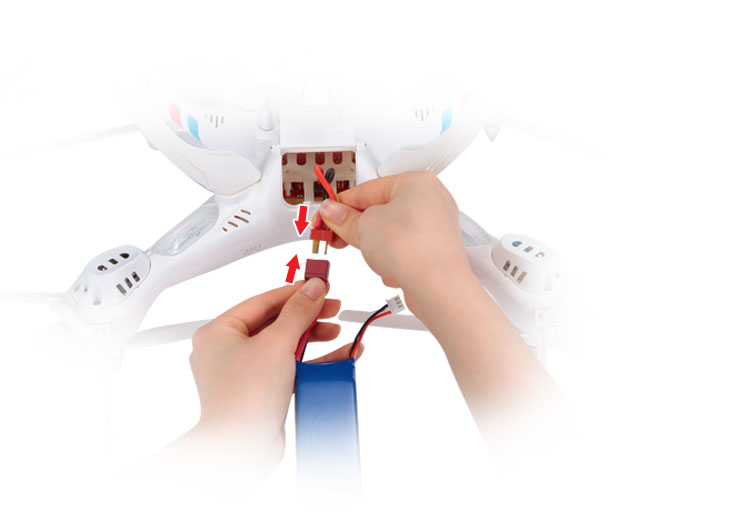 Each 7.4V 2000mAh LiPo battery for the X8C Venture will provide about five to eight minutes of flight time on a full charge. You may want to purchase several batteries to increase your ability to fly for longer sessions while expended batteries recharge. You can achieve between ten and fifteen minutes of flight time with a break for a battery change if you purchase and fully charge two 2000mAh batteries. Fly for fifteen to twenty-three minutes with two breaks for battery changes and three batteries.

Users also have the option to use 2500mAh batteries to gain an additional two or three minutes of flight time, increasing the average flight duration for this model by seven to eleven minutes. Users also have the option to purchase a quick charging system that can charge a battery in about an hour to reduce the amount of time between flights. Amazon and dedicated drone parts sellers may provide discounts when purchasing two or more batteries. 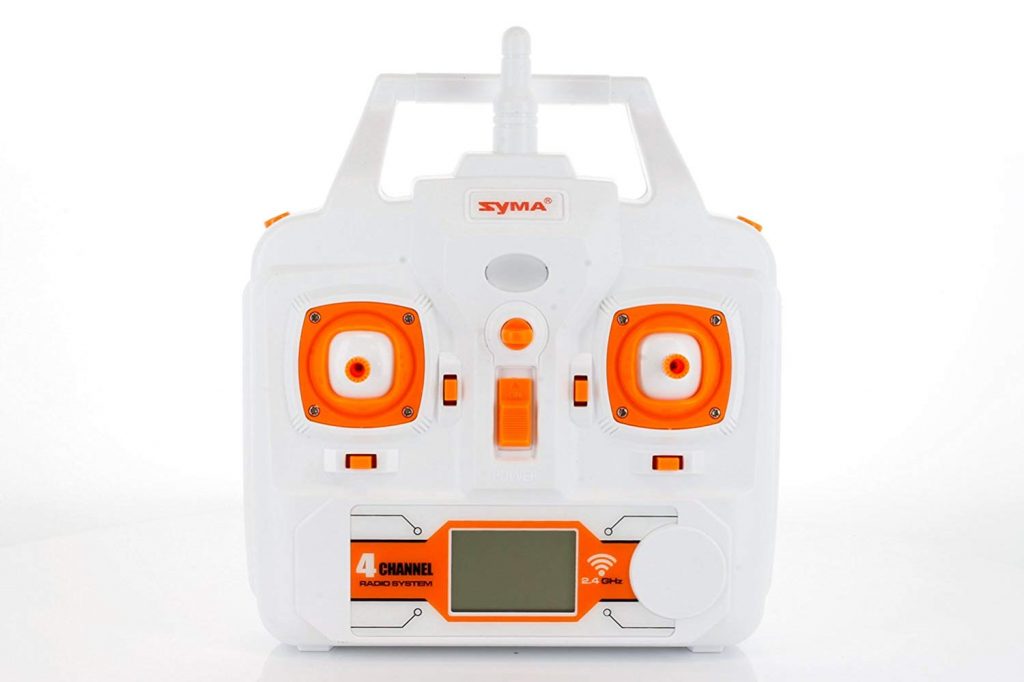 The four-channel 2.4GHz remote control transmitter for this quadcopter relies on spread spectrum technology to prevent interference while promoting efficient power consumption. The reaction time of this model of controller is up to 100 times faster than controllers on other frequencies. A small LCD screen on the remote control displays basic telemetry data such as battery level and signal strength.

The X8C Venture transmitter makes it possible to set the drone into either low or high speed mode. Low speed mode is ideal for intermediate pilots to get used to the controls on this model. High speed mode can be helpful when racing. You can also increase the speed of this drone by flying without the prop guards, but this is only recommended for more experienced drone pilots. In this mode, the agility and speed of the X8C Venture are significantly enhanced.

The standard control scheme of this remote includes two control levers as well as two fine-tuning switches along with switches for the headless and Eversion flip flight modes. Regardless of skill level, the size of this drone may make the 360 Eversion flip mode unpredictable, resulting in crashes when switching out of this mode. It is also not recommended to use flip mode indoors, in a crowded flying area, or in any location with restricted clearance.

The color scheme of the remote control varies depending on the color of the X8C model you choose. The black and orange models come with a white remote with orange accents, while the white model comes with a white remote with red accents. You will need four AA 1.5V batteries to power this controller and transmit directional navigation information to the drone. Batteries are not included. 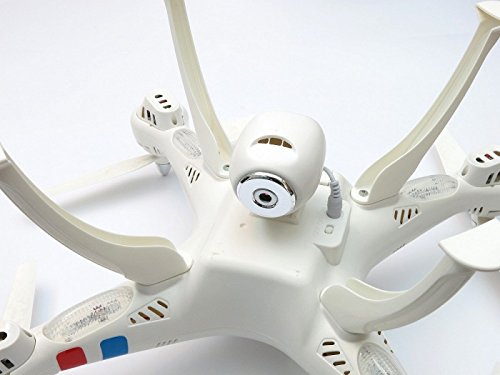 The 2MP fixed wide-angle camera in the X8C Venture is not as high-resolution as the cameras found in more expensive camera drones. The camera on this model is ideal for intermediate users who want to sharpen their aerial photography skills. Users can manually adjust the tilt angle of the camera to alter the viewing angle. This model does not feature the automated angle adjustment or digital stabilization technology found on photography drones.

The camera on the X8C Venture attaches underneath the drone. While it is possible to connect a GoPro or another higher resolution camera to this quadcopter, the increased weight may put stress on the coreless motors. Although the nine-inch propellers on this model do provide sufficient thrust, users may need to replace the motors on the X8C frequently if you choose to use this drone for more advanced photography purposes.

The Syma X8C Venture does not support FPV flight, but saves still photographs and flight videos to a micro SD card inserted into the back of the camera body. This model ships with one four gigabyte memory card. You can upgrade to a card with a larger capacity if desired, but the short flight time and long charging time of this model also make it possible to transfer captures between flying sessions.

Syma X8C Venture drones are sold by many drone and RC stores online and offline. You may find details on these models from major online stores such as Amazon or discount electronics clearinghouses. Amazon sells black, white, and orange models of this drone stocked by sellers for varying prices.

If you intend to fly for sessions longer than about seven minutes, you should purchase back-up batteries for the X8C Venture. 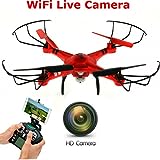 The Syma X8C Venture is a versatile full-size intermediate-level drone. If you want a drone that allows you to fly anywhere within a 100 meter (328 foot) range for a flight time of slightly less than 10 minutes on a fully charged battery, you should consider this model. The 2MP camera on this model also supports pilots who want to develop aerial photography skills.

In terms of upgradability, the X8C Venture drone produces enough thrust to support a standard GoPro camera with a mount. The weight of this modification may put strain on the motors and lead to frequent parts replacements. If you want to take higher resolution photographs or videos, your needs may be better suited by a low-end photography drone.

Increase the flight time of this model by upgrading to 2500 mAh batteries. You can also pick up a battery quick charger to reduce the charging time from 180-200 minutes to about 60 minutes. In addition to backup or upgraded batteries, you may also want to purchase a set of replacement blade propellers, landing skids, and prop guards. Find 12, 16, and even 24 piece kits designed for the X8C Venture in the color scheme of your drone. You may also be able to use some DJI Phantom parts due to the similarity in size and design.

If you want a sizeable, stable drone that bridges the gap between toy and intermediate models, you should strongly consider the Syma X8C Venture. This model has all of the standard drone features for an affordable price.

The Xyma X8c Venture Drone is overall a good quality product with advanced features but has a decent price tag.