Now here’s an interesting thing to work and play with! But let’s start from the beginning.

… The earliest known examples of compound microscopes, which combine an objective lens near the specimen with an eyepiece to view a real image, appeared in Europe around 1620. The inventor is unknown although many claims have been made over the years. Several revolve around the spectacle-making centers in the Netherlands including claims it was invented in 1590 by Zacharias Janssen (claim made by his son) and/or Zacharias’ father Hans Martens, claims it was invented by their neighbor and rival spectacle maker, Hans Lippershey (who applied for the first telescope patent in 1608), and claims it was invented by expatriate Cornelis Drebbel who was noted to have a version in London in 1619. Galileo Galilei (also sometimes cited as compound microscope inventor) seems to have found after 1610 that he could close focus his telescope to view small objects and, after seeing a compound microscope built by Drebbel exhibited in Rome in 1624, built his own improved version. Giovanni Faber coined the name microscope for the compound microscope Galileo submitted to the Accademia dei Lincei in 1625. Galileo had called it the “occhiolino” or “little eye”. (Wikipedia)

Fast forward another few hundred years. And lo and behold; nowadays a coat pocket-sized box contains an able optical device that you can acquire for small money. So… 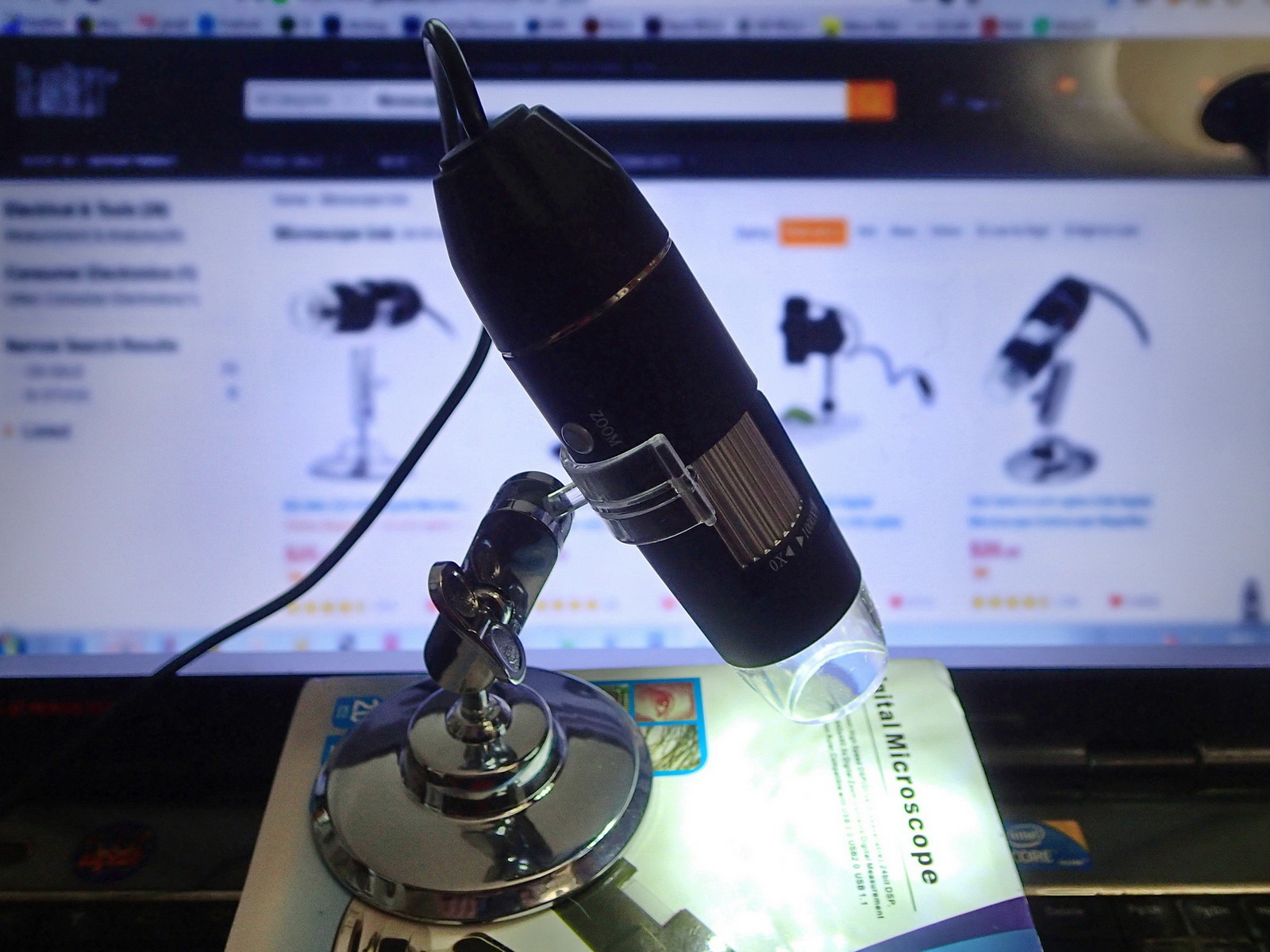 What’s In The Box?

The envelope around the white cardboard box contains all the data you need to use the microscope, complete with specifications and suggested fields of applications.

Inside you find the Microscope unit. It is a tubular thing with lens and LED lights on one end, and an USB cable coming out of the other. There is a small chromed plastic stand, a micrometer calibrating ruler foil, and one small CD with Driver printed upon it.

I presume you noticed how many times I said small, so believe me, that’s the first impression.
It is also presumed that whichever computer you’re going to attach the microscope to, still has a CD/DVD reader, since the device itself does not have any sort of internal memory where its software could reside.

The application areas suggested point at education, medicine, engineering, production, and all the various hobbies – which is an area of interest that is impossible to list.

Basically, KELIMA says the device is good for skin and hair inspection, control of all things educative, industrial materials and print inspection, jewelry and stamp collections, viewing biological samples, and “other” use; making it really versatile. 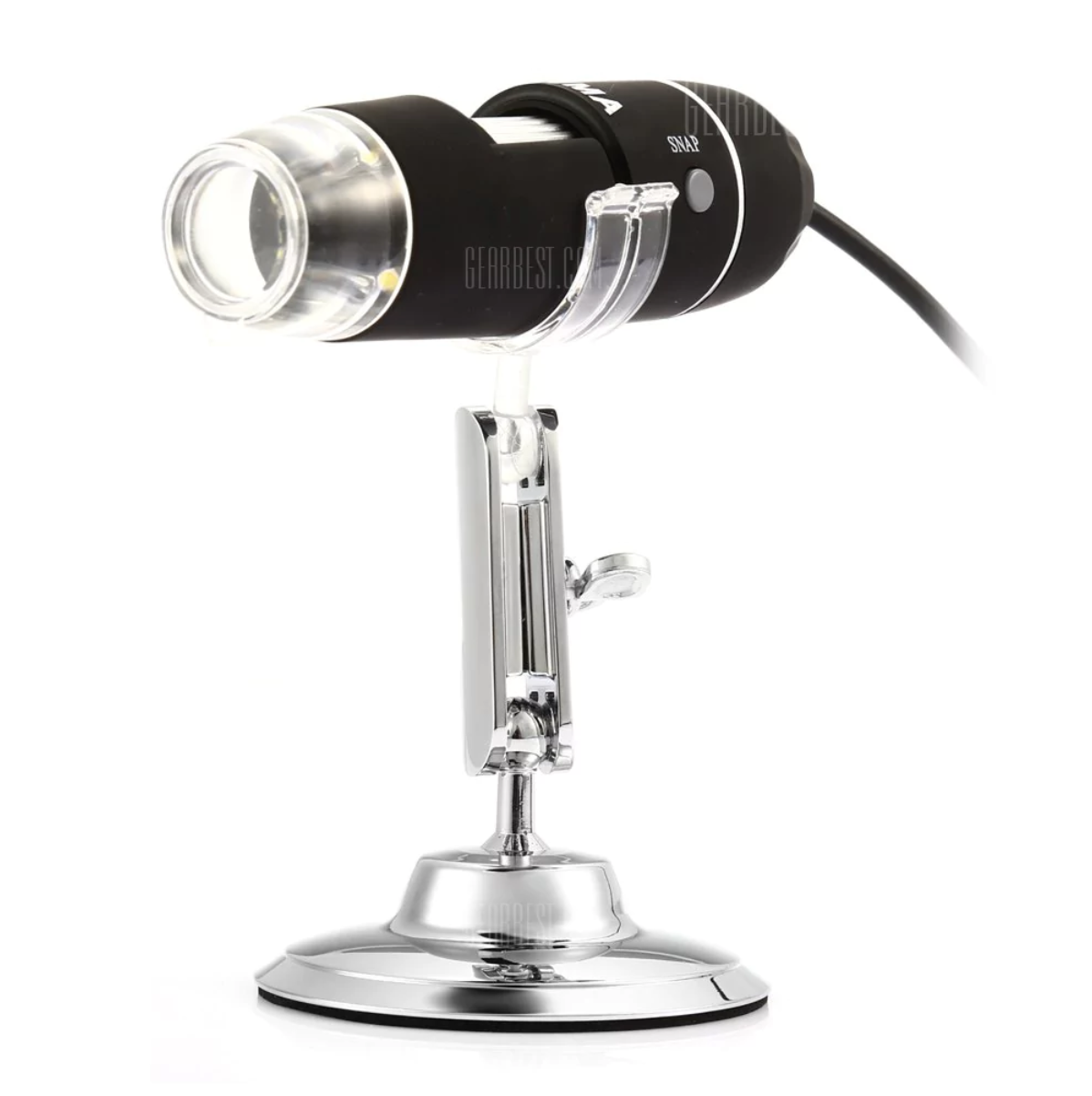 Some specs are different from those printed on the microscope package! Also, some specs are wrong – probably because of that typical lack of text control before printing. Oh, well…

The microscope is said to connect straight to any modern computer via an USB point, since it is supposed that all the software support it needs is already there. But (isn’t there always one?) in case it ain’t so, there is an 8 cm CD which contains the device driver, a program called Measurement, (a viewer), and a User’s Guide in .pdf format.

Sure enough, chances are you’re going to use the CD, just like me. So I installed the driver and the Measurement program. Both the Microscope icon and the camera (Amcap) icon appeared on desktop. Only thing, the first promptly activated my laptop’s built-in camera, while the other activated an array of reasons as to why the program couldn’t run on my machine.

So seeing what all I was missing to make it work, I went to collect and replace versions diverse of drivers and things alike. Long story short, I found a driver for Lenovo EasyCam and it runs the Amcap correctly. It did take some time, but time really flies when you’re bent on making something work.

At the moment of publishing, the Measurement program still wouldn’t co-operate.

Not long ago people did have that standard riposte at being snubbed for buying sloppily produced things; They’d just say “what would you expect for $20?” and probably justify the buy. Not so nowadays. It looks like really affordable prices are not related to low-value products any longer. This Kelima C22 Digital Microscope counts among such cases.

Design? I do not feel competent to judge the beauty of microscopes, but (ain’t there always one?) with regards to handy size, shape, and command layout for the functionality, this is one beautiful product. Materials, texture, practicality of use, it’s all there, and the parts are precisely aligned and firmly connected to each other. Weight, though irrelevant, is no object even if you’d plan to take the microscope along for some excursions. Colors used are charcoal matte for the unit, with silver and gray for the commands: simple and elegant.

Well, the manufacturer suggests not to use the microscope outdoors, but it can actually be done, using adequate caution and care, of course. Water and dust may kill it quckly.

Regarding the microscope stand, it is a must-have, as it solves the same order of problem as a tripod does for a camera! Forgive me for saying, but this one is barely adequate.

The smallish and irritatingly lightweight plastic support has thin rubber glued over a ferrous metal square at its bottom. It supports a tiny ballhead on its top, and another ballhead of the same diameter is added to the horseshoe-shaped open ring designed to snap around the microscope body. Both ballheads are friction-fixed by indentations of the two clasps that use small central winged screw to hold the arrangement together.

To my eye, the stand and its fixing parts should have been made of metal, or at least of ABS… and made fairly larger, at that. It could also do without a shiny mirror-like metallic coating, which gives it somewhat cheaper look. The stand should have been made in quality matte black plastic. There should have been a cavity in the stand base where one could add some weight – like a handful of birdshot – and close it with non-slip rubber cover. That would be a grand stand! The way it is now, it can still be steadied with a magnet.

An anecdotal little experience with the KELIMA C22 inscript above the focussing wheel on the microscope: at first I thought it was a printed strip glued to the unit. But then I felt the texture of the lettering. So I said to myself, good; this is just a piece of sellotape over the chromed letters, added to shield these from damage. When I pulled the sellotape off, the letters really shone, chrome-on-black. Pret-tee!  Such a classy little detail.

Alas, not for long. While I tried to focus the lens on an object, the letters dropped off, one by one. These were just individually glued to the tube surface! Whosoever decided to attach the name in that way… well. Even the cheapest cigarette lighters are printed more durably.

The whole device consists of the actual microscope tube which contains all the optical and electronic components, and a stand to which it is mounted for stability.

Its business end comprises the lens and eight lighting diodes around it, englassed in short transparent tube with its own plug, to ward off dust and humidity.

Behind the optical end there is a large and grippy focus roller accessible from what I’d call front side (for no special reason, since you can have that side point in any direction you please). The roller is rotated to focus the lens arrangement at the object viewed, when the distance between the object and the lens determines the enlargement grade. The maximum enlargement of 1000 times thus means the closest lens-to-object distance at proper focus.

To the left and right of the focus roller there are two small buttons; the left one named SNAP, the other ZOOM. Long-pressing the SNAP activates the scope and snaps off a photo. The ZOOM will zoom in five consecutive steps; press up to four times to enlarge, the fifth press will reset it back to original image size. The zooming function is, naturally, digital only.

The device contains an HD CMOS sensor with 24-bit DSP (digital signal processor). The still images can be saved in JPG or BMP format (up to 2560 x 1920px), while the video (up to 30fps) will save as AVI.

Since the optical side of the unit is encased in a transparent tube, you can use the outside light for object viewing. The eight LEDs that surround the lens are dimmable, and there is a wheel to control the light level, placed on the USB cable about 40 cm down from the microscope unit. Lighting is nicely uniform across the span of its FOV.

Some samples seen with the Kelima C22 Digital Microscope:

– Instructions & info – could be made a whole lot more precise!
– The Stand: flimsy, needlessly shiny finish, under-dimensioned.
– Software: platform-dependent could be made simpler to install.
– Packaging: not very sturdy, compared to, say, action cam packages.
– Chinese and English User Manual (.pdf) in the same file.

It is quite understandable when corners need to be cut, and so to keep the final product price in the competitive heights, so let’s not be overly sensitive to things listed as not-so-good. All factors considered, this is a very useable product easily acquired by just about everyone.

Great, affordable device. I would recommend this buy!

Now here’s an interesting thing to work and play with! But let’s start from the beginning. … The earliest known examples of compound microscopes, which combine an objective lens near the specimen with an eyepiece to view a real image, appeared in Europe around 1620. The inventor is unknown although many claims have been made over the years. Several revolve around the spectacle-making centers in the Netherlands including claims it was invented in 1590 by Zacharias Janssen (claim made by his son) and/or Zacharias' father Hans Martens, claims it was invented by their neighbor and rival spectacle maker, Hans Lippershey…
Kelima C22 Digital Microscope Review
Kelima C22 Digital Microscope Review
Fil
83.75/100