The camera was packaged in its cheap retail display box, about what I would expect considering the price.

An exception to the snug fit is the camera clip. The tolerances are slightly off such that the camera won’t fit securely. As a result you’re in danger of the camera falling out. Fortunately the clip for SJCam cameras fits the XDV properly (same as the clip for my Elephone Explorer Pro).

The waterproof enclosure seems reasonably well made though it doesn’t snap as tightly closed as others I’ve tested. I couldn’t check the claimed 30m waterproof rating.  I checked the buttons and other metal parts on the enclosure and found they are not magnetic, i.e., no iron is present so they shouldn’t corrode with proper care.  A slotted back door for the enclosure is included with the accessories.

The build quality of the camera body isn’t very good.  The seams aren’t especially tight and the camera generally feels cheap in hand. 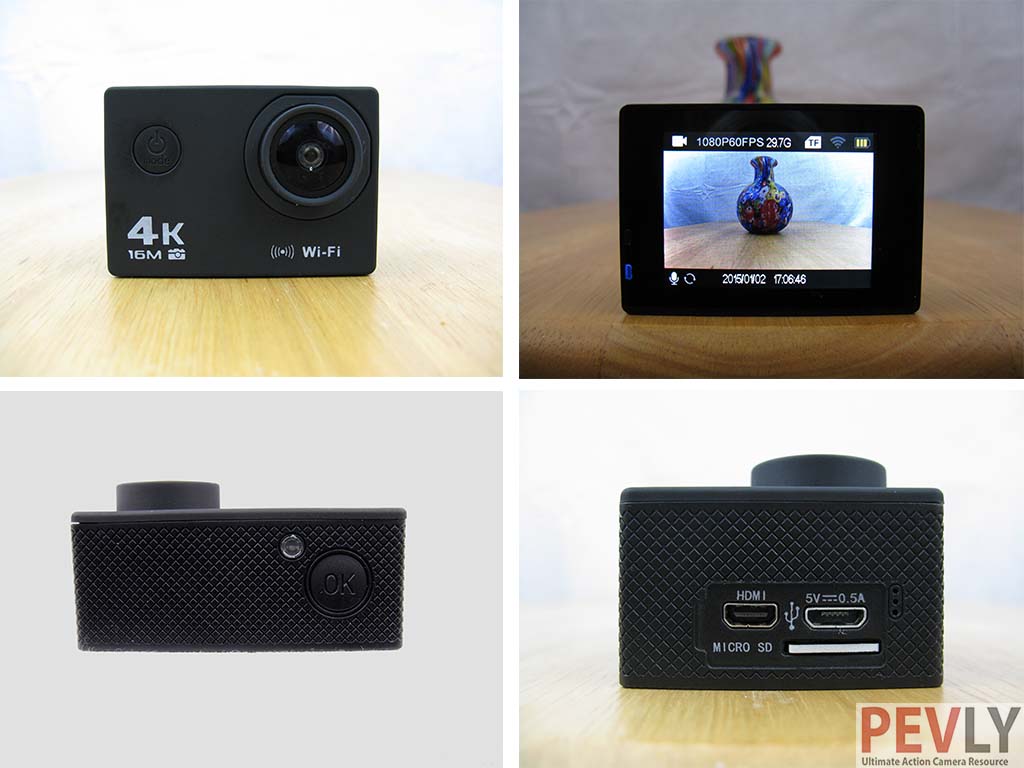 After opening and closing the battery compartment door several times a little bit of plastic cracked and snapped off – not a good sign, though at least the door would still close. Even before it broke the door was the most difficult to open and close of any action camera I’ve used to date.

The buttons have a definite click but unrefined feel. Unfortunately there’s no sensation at all when using the waterproof enclosure. You mash the enclosure’s hard-sprung buttons down until something happens on the camera.

The camera only has three LEDs.  The two on the back of the camera are easily washed out in daylight and the camera clip also blocks your view of them.  The LEDs can be turned off.

The beep sound when pressing buttons isn’t loud enough if there’s more than a modest amount of ambient noise. The beep sound can’t be turned off.  The rear screen is bright and crisp indoors and has accurate colors but it can’t be seen outside in daylight and the shiny surface causes reflections. The on-screen display information is legible.

You’ll find that SJCam SJ4000 accessories work perfectly well with the XDV, even the battery and waterproof enclosure. That makes it easy to replace anything that breaks or to add any special accessories.