You are here: Home / Action Cameras / What happened to the Graava – A self-editing action camera?

In the summer of 2015, the tech blogs were buzzing about a great innovation in the field I’m really interested in – sports cameras. Sites like TechCrunch, the Verge,  PetaPixel, and even the Forbes and the NY Times reported that a Brazilian startup called – Graava is about to change the way we use action cameras and video editing.

Proclaimed as the GoPro killer (not the first camera to get that name), this self-editing camera, picked up an amazing amount of mass media attention.

The idea behind self-editing camera

It would be silly of me to begin this article without clarifying to you what was Graava cam all about. Almost all of us hate video editing. It’s time-consuming. For some, it’s a really painful process. What if everyone can have a great video? Even if they have zero experience in video editing?

The idea of Graava was born after one of the founders, Marcelo, got hit by a car in 2012. The driver fled the scene, but thanks to the camera attached to his bicycle, Bruno was able to identify the license plate and file a police report. The driver has been arrested afterward.

After the incident, Bruno was on his bike again, but this time he forgot the camera. So that got him thinking, why I only carry the camera only on special occasions? The answer was – video editing. He did not have time nor patience to edit best moments from that day. The camera ended up in a drawer most of the time.

That got Bruno thinking. What if there was a self-editing action camera? He met his two partners Marcelo and Marcio via the Brazilian platform BayBrazil. On that platform, which connects startup owners from Brazil and US, they met each other and began developing the idea. 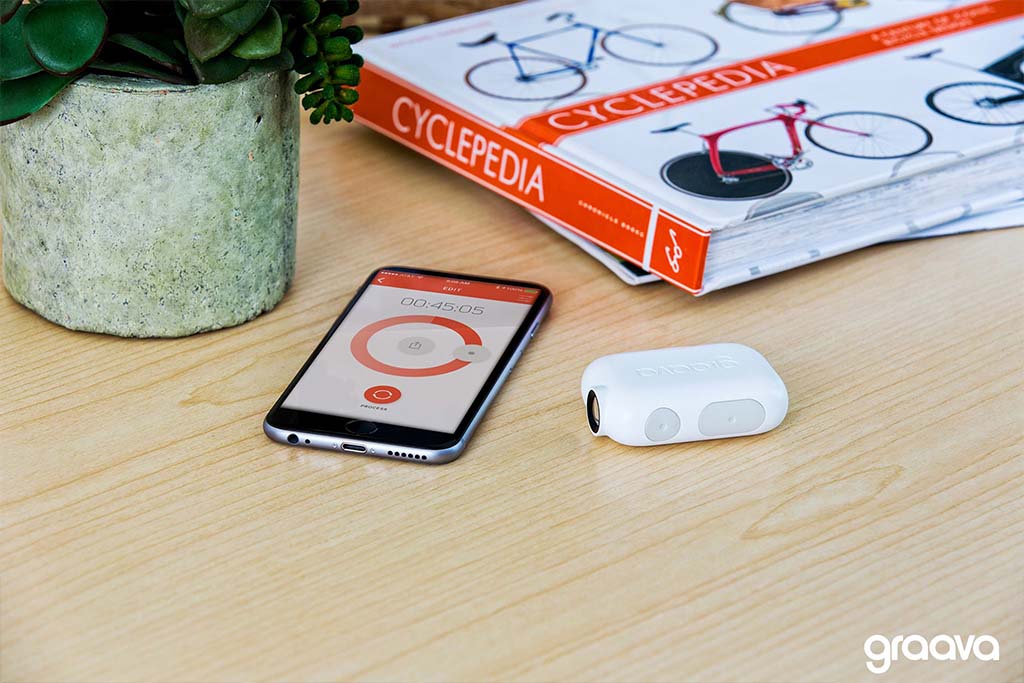 The most prominent selling point of the camera was that it uses the artificial intelligence, to determine which parts of your long-recorded video are interesting. To do this, the camera used all sorts of data from GPS, heart monitor, proximity, audio and light sensors, accelerator, etc.

After detecting interesting parts, Graava automatically creates a video thanks to its app. The 8MP image sensor is also worth mentioning.

The design of the camera was quite impressive. The company even received an international runner-up award for the design. It was manufactured with simplicity and minimalism in mind.

So what happened to the Graava?

Today, while trying to remember some of the action cameras I really wanted to have I remembered the Graava. I went to their website to see how things are going. In my last email conversation with them, I was notified that the product is about to be shipped early 2016.

I was shocked when their official website gave a 403 error. I thought it was just on my end, so I used isitdownrightnow to see if the domain was unreachable only for me. The result was this

Okay, so perhaps they’re having trouble with the hosting or a server. I then went to their Facebook page. Last activity was on January the 10th 2017. For a tech company that picked up that amount of coverage, it was quite strange that they do not take care of their website, neither any of their social media channels.

The camera became the App?

After further research, I noticed that there is no more camera in company social media post. Their latest posts were regarding the App. So I began researching. Somewhere in 2016, after the camera got discontinued, the Graava app was born. They launched iOS and Android self-editing video app.

After getting in touch with one of the founders, I realized that in early 2017 they discontinued the app as well.

Was Graava a scam? (Updated – Not it was not)

I only found one complaint that Graava camera might be a scam. According to Russian YouTube user company never delivered the camera he paid for.

unfortunately this is another method of fraud. Me, as many people sent money to this company and they deceived me. I ain’t got no camera, no money back. Be careful, do not fall for the deception! Opening case in international court it is not easy, but i do it! (source)

In this article, I will not be going into that allegation. There have been plenty of similar stories of crowdfunding projects on KickStarted or Indiegogo. That kind of startup stories who fail and disappear are nothing new. If however you paid for the Graava camera and never got it or the refund, please leave a comment below.

Important Update: One of Graava founders, explained what happened to Graava.

While there was broad positive response to the concept, we were unable to get enough funding for taking the hardware to production (manufacturing a consumer product requires a substantial amount of capital beyond the cost of each unit sold in pre-sales).

So the project refunded all pre-sales to customers early in 2016 and pivoted to SW-only. The SW app was introduced in 2016 and also got broad positive response, but failed to develop a sustained growth in user base and engagement. The project was discontinued early in 2017.

This conversation is not a public release issued by the company. It’s rather a private conversation between me and one of the founders. As he explained, even though the product discontinuing has not been publicly announced, all of their customers received emails about it.

Since the YouTube comment was posted a year ago, I assume that the customer accusing Graava of scam got his refund.

The future of self-editing action cameras

Personally, I was so excited to see action camera market making some interesting break-troughs when the Graawa was initially announced. The concept itself was quite good and it attracted tons of attention from the media. Unfortunately, as one of the founders explained to me in the email, they were unable to get enough financial resources to go past the concept and beta phase.

As an enthusiast who is tired of same sports camera products for a while now, I would really like to see either Graava or some other company developing something interesting and brave. Even though Graava was unsuccessful that does not mean that there’s no interest in self-editing cameras.