You are here: Home / Uncategorized / Multi-tool Review: The Three Of Those 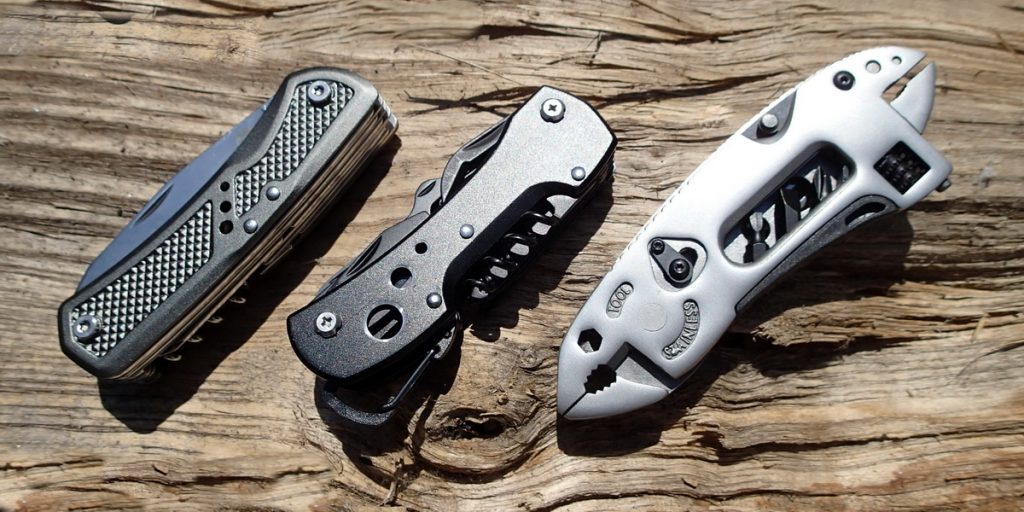 The overall history of more-in-one tools is pretty long and the idea of incorporating several tools in one small portable unit is very old, dating back at least as far as Middle Roman times. Many of these tools were based around eating. Such functional products are mainly materialized around the idea of reducements in size and weight, which was always attractive to creators of equipment for soldiers (among other groups).

Such toolpacks are made in many ranges – from general purpose outdoors models, thru specialized applications, like a pack of typical bicycle keys and wrenches. Some are multi-part, the other may be made of one single piece that is pre-formed for several functions. There really is no end to variations, each aimed at being useful to a different kind of people, requirements, and purposes. Let’s also not forget those multi-use weapons, because history has adorned our destructive abilities with the likes of those too. The most commonly known would be, say, the bayonet-fitted rifles, knuckledusters on the knife or pistol handles, the knives with incorporated firearms – or vice versa…

In 1983 Tim Leatherman sold his first “Pocket Survival Tool”, larger and more robust than a pocket-knife-based tool, which incorporated a set of needle-nosed pliers. And the ultra-popular Swiss Army pocket knife offers ever more modern tools in the contemporary folding tool. You can find models with a small light, a watch, even with an USB memory stick. And still no end to ideas, ranging all the way from practical to utterly… er, less sensible.

Also, let’s not forget the TEOTWAWKI* hysterics, Zombie fighting and evading future, or any similar impulse that drives people to think up ever more variegated items, just to fit in today’s all-selling trends. But the good thing in this avalanche of multi-tool production is the enormous choice laid out before us, so as to pick what suits us best. Automation of voluminous series of all tool production has significantly lowered the prices, which in turn, magnify the sales. So the competition is really fierce. Just open the site pages like GearBest and type multitool. The number of instantly generated answers will make you duck!

But let’s get to the three samples we have at hand.

This pocket knife looks gorgeous. It fits perfectly in my (not so small) hand. Considering the size it is not overly heavy, and it has a range of foldout tools you can find useful every day.

The handle is smooth but not slippery, and you can grab it full-force without any rims or corners biting in your skin. It can be applied rigorously to any material that you need to work on. Of course, it will never replace a full-tang knife, since it is a folding model, and the tools are not lockable – the feature I’m really missing.

So take care, lest you damaged yourself!

To my sorrow, the pins that hold together the product are designed in a wrong way. These connecting elements are press-fitted, and on my sample, the hind pin end has broken off. I’ll have it replaced by a long, thin screw which can be tightened if the connection becomes wacky. On the good side, this pin only holds one rotatable tool, which is the belt-attaching carabiner. Still, it would be disastrous and possibly harmful if the front pin snapped off, because of its insufficient strength, and the tool in use was bent out of alignment.

I’d strongly suggest to ZANMAX to apply the screwed-on pins – of double thickness, and with at least double-sized heads – with the otherwise same model. That would make it nigh indestructible, and also more safe to use.

This perfectly looking tool is basically a strong, thick metal handle which ends on one side with the pliers. On the other end of the tool is a wrench. The pliers handle is sturdy, excellently formed in ergonomical sense, and has a thoughtfully textured surfaces where you need and expect them. The pliers are spring-loaded forcing the handle open, but are also lockable in the closed position, so you can use other tools without the handle getting in the way. The maximum width of the pliers jaw is about 15 milimeters, and there are also the wirecutter blades in there, nearest to the fulcrum.

Let me say right away that the working halves of the pliers are riveted together, and it is my experience that exactly the wire-cutting tool puts this rivet really to the test when you try to snap some hard wire of a more serious gauge. I’ve had the pliers of one very famous multitool manufacturer skew apart right while using the wire-cutting tool. I pressed the handles together in one hand and the rivet rim was bent outwards. I tried to repair it by beating the rivet back to its original form, but it was already damaged. So I had to replace that rivet by a screw and nut, which had to be made to measure, of course. The service has cost me about as much as the whole multi-tool!

Again, I’d strongly suggest to manufacturers of such pliers to connect the halves by over-dimensioned screwable parts, since all forces applied to the levers (handle and jaws) really multiply at the fulcrum – and the wire-cutter tends to spread the jaws sidewise!

Of course, I have not tested the endurance limits of this tool here, but then, I knew the dangers of it. I only tried to cut some softer metal, like a nail, a thin stainless steel, and somewhat thicker copper and aluminum wires, and the jaws managed those with ease.

The wrench on the other end has a variable span to a maximum of 12 milimeters. It’s not much, but still very useful for everyday small applications. The jaw size is adjustable by the usual and typical excenter, and that is about all that needs be said about it. Simple and sturdy, it works well.

On the underside of the tool the ergonomy is augmented by a plastic inset that houses three screwdriver bits: two for straight-slotted screwheads, and one Phillips cross-type. The bit bases are hexagonal, and there are two receptacles for those. One is at the tip of the pliers, the other at the side. Both receptacles have a magnet inside so the bits don’t drop out.

The multi-tool also has a black anodized stainless steel knife blade of 6 centimeters length. It can be one-handedly opened toward the wrench-end side. The tool forms a safe handle, the plastic inset side up, and can be nicely maneuvered for various cutting, whittling, peeling and other applications.

On one side there is also a belt clip, sufficiently springy and mounted in a way where it does not get in the way when you use either element of this tool.

In all, this is one excellent product, which I can heartily recommend to all of you folks that follow the DIY religion!

The smallest item in this review is the nifty, black pocket knife with a lot of useful blades.

Every single part is made of stainless steel, all in elegant black, excepting the connecting pins and (finally!) screwable front and back fulcrums around which the blades rotate open or closed. These are shiny chromed and create a nice contrast on matte-black surface of the handle. Both handle sides also have three holes through the linings, and show metallic-white rims. These holes are of various size, and do not actually have any function, unless one can think of something, but the overall design is interesting in an attractive way.

The screwed-in pins make it possible to replace certain blades, though it is probably just a reassurance, since it would be easier to buy the new knife than to pass through all the hassle of servicing.

There is one single thing wrong with this knifelike tool, and it is its belt hook or carabiner. It is connected and rotated around a riveted pin on the back of the handle, and an obvious afterthought, since it rages out of the handle part just where the back of your palm needs to be pressed!

So you have a part that works against the very use of the tool.

It would be of no consequence if the carabiner was screw-fixed there; one could easily remove it from the handle, and the rest of tool pack would be very handy indeed. However, the belt hook is riveted in. It is also made of a thin, soft metal which will bend if you squeeze the handle a tad stronger. And when it bends in the way that happened to me, the carabiner still juts out of the handle, with the added difference that it couldn’t be operated any more.

Frankly, it appears as functional as a loop of barbed wire added to an axe handle, so you can hang it in the shed! A simple ring where one could tie a piece of string would be more than sufficient – the way the Swiss Army Pocket knife has. Maybe the person who designed the thing just does not use multi-tools.  I’m sure it looked useful in blueprint – but I’m sorry to herewith inform the designer that I’ll do my best to remove the carabiner-hook and try to forget it was ever there. It will not be so easy since it is riveted inbetween the liners, but I’ll manage.

Aside from this one grumble, the multi-bladed little knife is very nice, and if you don’t plan on using the tools too heavily, you might even leave the hook where it is!

We are all aware of the popular saying Less is More, right? Well, this has high logical value for photography, hinting at the quality directly related to the simplicity of the thing. It also holds true for the purpose-made, simple and rough tools in comparison to multi-tools, where simplicity means relatively low range of variations in use, but also less parts to break.

However, this is not always a rule to follow when it concerns the costs. Prices are dependant upon the number of quality parts connected in high-precision ways. The overall expenditure may depend upon the materials, the production complexity, and the purposes. The prices may also be different according to the group of users the product is aimed at. Too many factors to consider here, but you get my drift.

The affordable items shown in this review are meant to put your attention to all the elements that are involved in both – the production and your planned acquisition, but all this is just a drop in the ocean, really. I can thus only advise you to think well before investing, and then to choose carefully among the models that you can use for your work. Needless to say, Gearbest offers an overwhelming choice in this matter.

* TEOTWAWKI is quite a mouthful  of an acronym, meaning The End Of The World As We Know It.