We are here today with a new camera recently released by Hawkeye, I’m talking about the Firefly 8S. We have already reviewed another Hawkeye camera in the past, the Firefly 6S,  and it has a great quality/price ratio! The Firefly 8S is available in two field-of-view versions, 90° and 170°.

In this review, I’ll take a look at the narrow field of view option, the Hawkeye 8s 90°. Even though we haven’t tested the 170° version, in theory, the differences between the two should only be in the field of view that camera can capture (wide vs narrow).

Will the Firefly 8S camera be as good as other action camera with the 170° lens? Let’s find out.

To clarify once again, there are two models of Firefly 8S :

Before I show you the content of the box, take a look at Hakweye Firefly 8S product specs. 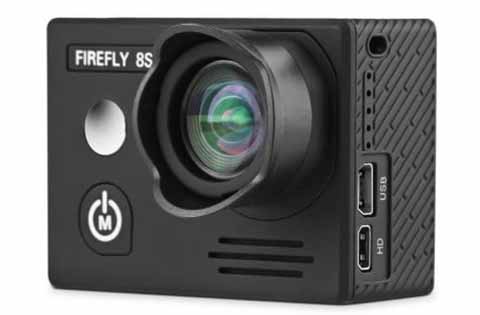 As the most of Chinese cameras it has a lot of accessories. In particular it offers two interesting pieces. The first one is the Anti Reflex Gear, (lens hood) made to mount around the lens.

Honestly I was a little bit skeptical about its function, but I was wrong; it helps a lot when the sunlight shines directly onto the lens. You will see the difference in the Video section.

The other new accessory is the “Pendant Mount” that allows you to bring the camera along without hindrance. It is small, easy to use, cheap, and quite practical.

The design is mostly like all the other cameras, honestly isn’t it time to invent something better?  But then, I said “mostly” because this camera has a little mirror on the front that allows the owner to shoot perfect selfies! And with its anti-reflex gear it seems to approach details of a professional camera!

The entire camera surface is rubberized which ensures a perfect grip in every situation. Main buttons are big and easy to feel under the fingers, also with gloves on.

Take a look at the Firefly 8S overview.

One of the first things I noticed is the SD card slot position. This helps with heat dissipation generated during the recording. I also love all the colored and backlighted buttons, they’ll change from blue to green when the menu is open. A little flaw is the absence of a led indicator on the screen.

The screen did surprise me, it is perfectly visible in any condition, also under the full sun glare. This is further aided by the setting “LCD Brightness” that allows you to set the brightness of the screen.

It doesn’t help only the quality of the view but also regulates the battery depletion. About the temperature; this camera differs from its far cousin with the same hardware, the Andoer AN7000. It actually manages to keep the temperature low. It is not cold during a recording, but never enough hot to worry about.

Grasping the menu on this camera was easier than I expected, it is not the fastest but absolutely very intuitive. With the Power/Mode Button you can switch between Photo and Video mode and, based upon what mode is selected, when you press the Up button, it will direct you to the settings screen. With it there are also some classic fast settings (shortcuts) for the actual mode.

In the sub-settings we find:

Obviously there is the same thing for the video:

These are only the fast modes and going into the shared settings we’ll find:

The general settings part is reachable using the playback button in the menu. It is composed of:

This camera has a Sony IMX 117 sensor with an Ambarella A12S75. Well, with this hardware configuration the Firefly 8S has all the advantages in order to be a great camera.  Differently from a lot of other cameras, this one has a real 4K with real 30fps!

This feature is like many more expensive cameras, if not better. Over the 4K 30fps this processor can handle very high frame rate without losing too much quality. For example, this is my dog in 720p 240fps:

As you can see with the resolution of 720p and 240fps the image is very distorted, I think the camera extends the image to reach 720p resolution but I’m not sure. By the way, every frame rate and every resolution on this camera are legit, there are no interpolated FPS or resolutions on this model.

With 4K resolution, the quality is incredibly good, this is an example:

This is one frame extracted from video, and it looks like an ordinary still photo!

General quality of the video is very good and sharper than some of the cameras with similar specs I tested.  With the anti reflex gear you really avoid many bad reflexes on the lens. This is the difference with and without this gear:

Sometimes when the sun is shining directly into the lens there is a little “glass” effect, but nothing significant. Apart from this particular condition, when recording in the daylight this camera is excellent!

Unfortunately, it is perfectly the opposite during the night or in generally low light, because this camera is ridiculously dark. The most evident example I could make is in a underground parking because these have more or less the same light level:

And obviously it is worst during the night

I also noticed that the more you raise the frame rate the more dark the image seems.

After all these tests, did you noticed the difference between 90° and 170°? No? Ok, I show you how much change:

We recorded an underwater video with Hawkeye 8S, take a look of how clear it is.

The biggest problem of this camera is/was the fact that in the higher resolutions (4K and 2.7K) or in general when it is under lots of performance stress (1080p 120fps, 720p 240/120fps ) the camera randomly stopped recording.

In other words, you can start the recording but you’d never be sure it is still recording; it would quit unexpectedly, after 10 seconds or after 3 minutes, there was no rule. I have tried different class 10 SDcards, the issue was still present. The issue still appears to be there after the latest firmware update.

After consulting with my colleagues, I decided to buy a different, higher speed microSD card. I am waiting for it to arrive, and I’ll update the review as soon as I know if the quit-recording issue is related to an SD card or a firmware in the camera. The update on the issue is coming soon.

The problem was the Sdcard speed, I bought a new Sdcard link and now every resolution and frame rate works perfectly!

The image quality is one great point of this camera. Obviously these kind of cameras are not primarily made to shoot photos but if they can make it… why not!

I was quite satisfied with the quality of the still photos the Firefly 8S creates. Here are some samples, so you can judge yourself.

Colors are full and bright, the backlight appears clear. Everything works great!

This camera has the Long Exposure feature, here are quick samples of 1s/10s/60s exposures:

Also the audio surprised me, it is quite good. A little bit favoring low frequencies but with its default setting (80%) it will be perfect because this camera has an auto volume balance. It manages the distortion and the frequencies mixing. This is the test in front of a stage. Believe me that the volume was really, really high.

These are the results of my battery tests:

This camera has a 1200mAh battery, and this is in fact higher that the average battery capacity found in similar price range sports cameras.

Hawkeye with the Firefly 8S hits the target. Wifi and App works as every wifi and every app should do. The WiFi has an average range of 10 meters and the app is perfectly stable.

The nice thing of this app is that everything is within reach of the finger, and everything is changeable in the main screen. Meaning that the app itself is quite user friendly and easy to navigate.

The Bluetooth feature is useful only with the Remote Control (sold separately) and it cannot connect to the phone.

The Firefly 8S is one great camera. For the price, I can’t ask for anything better. I think it is one of the best cameras for anyone wishing to try one of affordable action cameras. It features great quality in every aspect and has practically no flaws except for the slightly inferior low-light performance.Yes, this version has a FOV of 90° instead of the more usual ~170° but it all depends of what you have in mind for cameras like that. Personally I didn’t feel bad with this “narrow field of view”. One can hardly expect more from this camera.

We are here today with a new camera recently released by Hawkeye, I’m talking about the Firefly 8S. We have already reviewed another Hawkeye camera in the past, the Firefly 6S,  and it has a great quality/price ratio! The Firefly 8S is available in two field-of-view versions, 90° and 170°. In this review, I'll take a look at the narrow field of view option, the Hawkeye 8s 90°. Even though we haven't tested the 170° version, in theory, the differences between the two should only be in the field of view that camera can capture (wide vs narrow). Will the…
Hawkeye Firefly 8S (90° Version) Action Camera Review
Hawkeye Firefly 8S (90° Version) Action Camera Review
Alessio

I would recommend it